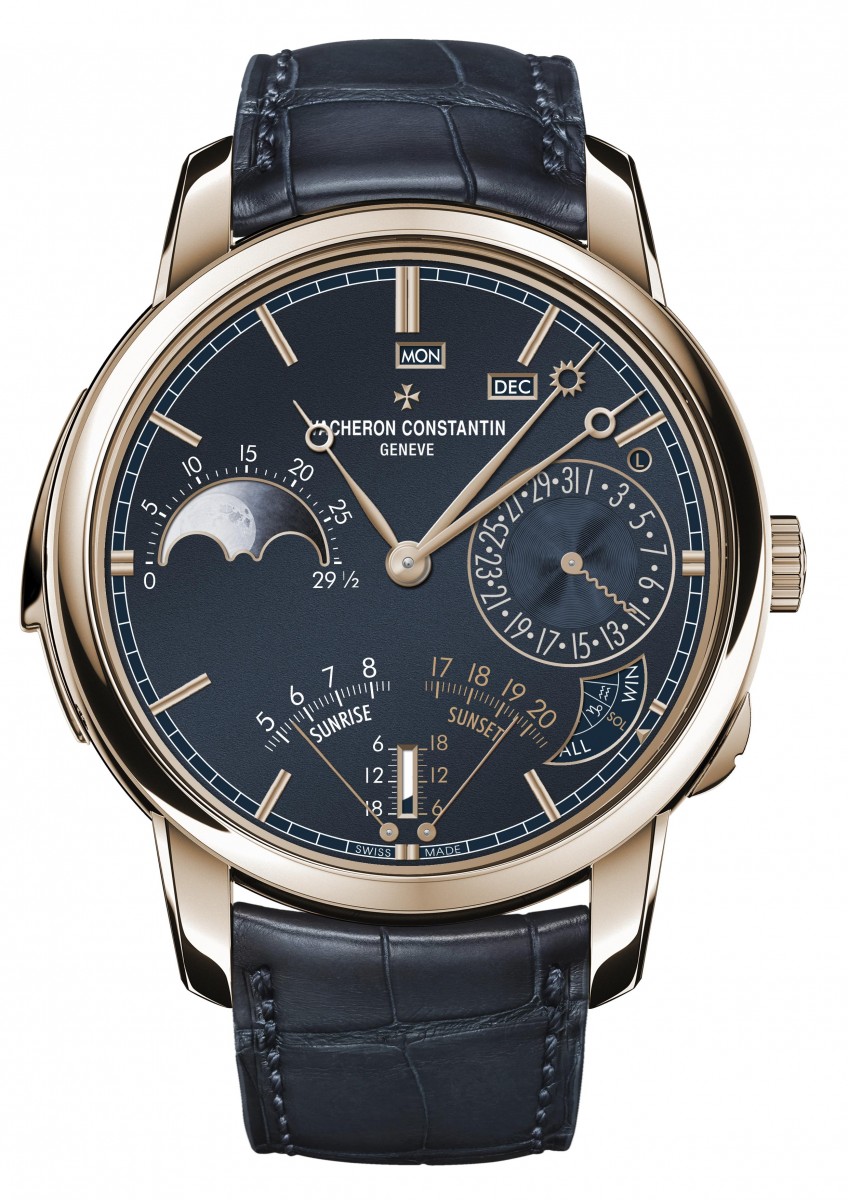 April 2020 – Displaying a range of indications including civil, solar and sidereal time, as well as combining 19 complications within this minute repeater calibre makes this unique watch a masterpiece of aesthetics and technical horology. Les Cabinotiers Astronomical striking grand complication – Ode to music is a tribute to the grand laws of Nature, which continue to exercise their formidable powers of fascination.

Les Cabinotiers Astronomical striking grand complication – Ode to Music offers a fresh demonstration of Vacheron Constantin’s technical mastery in the creation of horological grand complications. As part of the range poetically named “La Musique du Temps®”, which includes a collection of exceptional chiming watches – all one-of-a-kind collector’s pieces –, this new creation is based first and foremost on a minute repeater which determined the construction of the entire calibre.

The starting point was the famous Manufacture 1731 movement, due to its extreme slimness for a minute repeater mechanism. At just 3.90 mm thick, the 1731 calibre also has an impressive 60-hour power reserve and a magnificent sound quality, thanks in particular to the development of an entirely silent flying strike governor. This movement has therefore been reworked to accommodate the astronomical complications that make this timepiece an exceptional watch. With the new 1731 M820 calibre, this timepiece is thus equipped with 19 complications – a feat in itself – housed in a space barely 7.84 millimetres thick, without straying from the spirit of the ultra-thin base movement. One of the great challenges was to index the running equation of time to the minute repeater while maintaining extreme slenderness.

This watch is equipped with a perpetual calendar that is harmoniously expressed on the blue opaline dial. The date is indicated by a serpentine hand in a snailed counter at 3 o’clock for the sake of legibility. The days, months and leap years are discreetly displayed in windows between 12 and 2 o’clock. The date is indicated by the precision moon phases and age, but also the day / night indication which is coaxial to the moon phases, a logical and lyrical complement to the perpetual calendar. The lower part of the dial is occupied by the pointer-type display of sunrise and sunset times, complemented by a linear indication of the length of day and night. A 4 o’clock aperture also reveals a disc bearing the signs of the zodiac, seasons, solstices and equinoxes.

As heralded by the latter functions, this piece is first and foremost an astronomical watch which, in addition to the civil time indicated by the two central hands, also displays the particularities of solar time. Since the Earth’s path around the Sun describes a trajectory that is not circular but instead elliptical, and given that the Earth’s axis is inclined at 24° to the plane of its orbit, the time between two solar zenith passages is not the same throughout the year. This difference between the solar (true) day and the civil (average/mean) 24-hour day ranges from -16 to +14 minutes depending on the time of the year, coinciding only four times in 12 months. Known as the equation of time, or time correction in astronomical parlance, this information has long fascinated watchmakers. The fact that these variations are rigorously identical from one year to the next makes it possible to programme them mechanically via an annual cam that controls the display of this time differential. For this timepiece, the company’s master watchmakers have chosen the rarer and more complex solution of a running equation of time. This consists in also displaying solar time by means of a central minutes hand, in this instance symbolically serrated, and thus enables instantaneous reading of both civil and solar time.

An astronomical watch according to Vacheron Constantin’s master watchmakers would not deserve its name without an indication of sidereal time. This is precisely what can be viewed on the back of this timepiece, with a sky chart ingeniously formed by two superimposed sapphire discs. Taking a fixed star in the sky as a reference point, the time it takes the Earth to complete a full 360° revolution, or sidereal day, is exactly 23 hours, 56 minutes and 4 seconds. Since the Earth both spins on its axis and revolves around the sun, it takes about four minutes less than a calendar day to return to its point of departure in relation to the given star. On this model, the first lower mobile disc is rimmed by a sidereal time scale punctuated by the cardinal points, which thus rotates in step with sidereal time.

Still on the same disc, an off-centred blue ellipse serves as a transparent indicator of the constellations of the celestial vault, which are positionned on the fixed upper disc. This mechanical ballet thus reveals the vision of the sky in motion as seen from a given point on Earth. This same second disc also bears a white ellipse for the celestial equator and a red ellipse for the ecliptic. While the first is a projection of the equator onto the celestial sphere that takes into account the Earth’s approximately 24° inclination, the second represents – from a heliocentric point of view – the plane of the Earth’s orbit serving as a reference for celestial coordinates. Finally, one notes an intense blue dial bearing the months of the year.

The difference between the sidereal day and the mean or average day means that the movable lower disc will accelerate daily by some four minutes in relation to the fixed outer disc, so as to indicate the current month at exactly midnight by means of a yellow arrow.

Housed in a pink gold case measuring 45 mm in diameter and barely 12.54 mm thick, perfectly designed to accommodate the sky chart corrector and the minute repeater slide on the case middle, this calibre is one of the very few movements to offer simultaneously a minutes repeater and the civil, solar and sidereal time..

This extreme level of complexity is matched by the exceptional finishing of this timepiece, including the Côtes de Genève that can be be admired through the transparency of a movement that appears to be floating in the stars. A midnight blue alligator leather strap with pin buckle rounds off the elegance of this captivatingly complex timepiece.

In the Vacheron Constantin universe, Les Cabinotiers represents a department in its own right dedicated to the personalisation of models and to unique creations. This tradition dates back to the 18th century, a time when master watchmakers were called cabinotiers and worked in ateliers bathed in natural light, known as cabinets and located on the top floors of Geneva’s buildings. In the hands of these learned artisans, open to the new ideas of the Enlightenment, exceptional timepieces were born, inspired by astronomy, mechanical engineering and the arts. This expertise, which constitutes the great Geneva watchmaking tradition, has been flowing through Vacheron Constantin’s veins since 1755.

Chiming watches occupy a special place among horological complications. For more than two centuries, theses complex mechanisms have been highlighted by Vacheron Constantin. Today, Les Cabinotiers department has chosen to pay tribute to them through one-of-a-kind creations on the theme “La Musique du temps®”.

Born from the need to tell the time in the dark in an age when people had to rely on candlelight, chiming watches have taken various forms: repeating on demand the hours, quarters or half-quarters, as well as the minutes depending on the versions; Grande and Petite Sonnerie (sounding the hours and quarters in passing, with or without repeating the hour on each quarter); and finally those with an alarm (programmable chime). While each of these complications has its own distinctive characteristics, they all combine an integrated and complex mechanism with the finely crafted nature of musical instruments in terms of their resonance, acoustics and harmonics. Featuring watch cases equipped with complex movements as their only means of musical expression, these creations represent a magnificent feat of miniaturisation.

At Vacheron Constantin, the first mention of a chiming watch dates back to 1806: a gold repeater pocket watch registered by the founder’s grandson Jacques Barthélemi Vacheron, in the very first production register kept in the company’s archives. Ever since, sonnerie or repeater watches have been an integral part of the Manufacture’s proud heritage, steadily enriched over the decades.

Sound and music have always played a role in the Maison’s partnerships, the latest of which is with Abbey Road Studios, a name closely associated with iconic artists such as The Beatles, Adele and Oasis. In collaboration with the studios, Vacheron Constantin launched its Fiftysix® collection, backed by the “One of not Many” campaign. The partnership also has a role to play for “La musique du Temps”, as Vacheron Constantin entrusts Abbey Road Studios with recording the unique sound of each model.

“Above and beyond extremely similar values, Abbey Road Studios and Vacheron Constantin work closely together on creative collaborations involving both content creation and sharing expertise. Entrusting the production of the sound prints of our models to an internationally recognised expert in the recording world is an integral part of our collaborative endeavours”, explains Laurent Perves, CMO Vacheron Constantin. For the first time, the repeater watches from “La Musique du Temps®” range have a unique sound print, recorded and certified by Abbey Road Studios. As Jeremy Huffelmann, Head of Partnerships at Abbey Road Studios, points out: “The opportunity to capture the sonic identity of these incredible timepieces is a privilege. These recordings perfectly encapsulate the shared values of craftsmanship, expertise and excellence that define our collaboration, whilst forever preserving the personality of these singular timepieces.”

Les Cabinotiers Astronomical striking grand complication – Ode to Music provides a fresh demonstration of Vacheron Constantin’s technical mastery in the creation of horological grand complications. As part of the range of exceptional chiming watches named “La Musique du Temps®”, this new one-of-a-kind creation is based first and foremost on a minute repeater which determined the construction of the entire movement. The starting point for the work was the famous Manufacture 1731 calibre, due to its extreme thinness. Redesigned to accommodate a range of astronomical functions, the new 1731 M820 calibre is thus equipped with 19 complications, notably displaying civil, solar and sidereal time – each with its own gear train in addition to that of the minute repeater. This technical feat is perfectly in keeping with the spirit of the ultra-thin base movement, since its 600 components are housed in a calibre less than 8 millimetres thick.

Back
Celestial hours and minutes
Transparent sky chart of the northern hemisphere with indication of the Milky Way, of the ecliptic and celestial equator