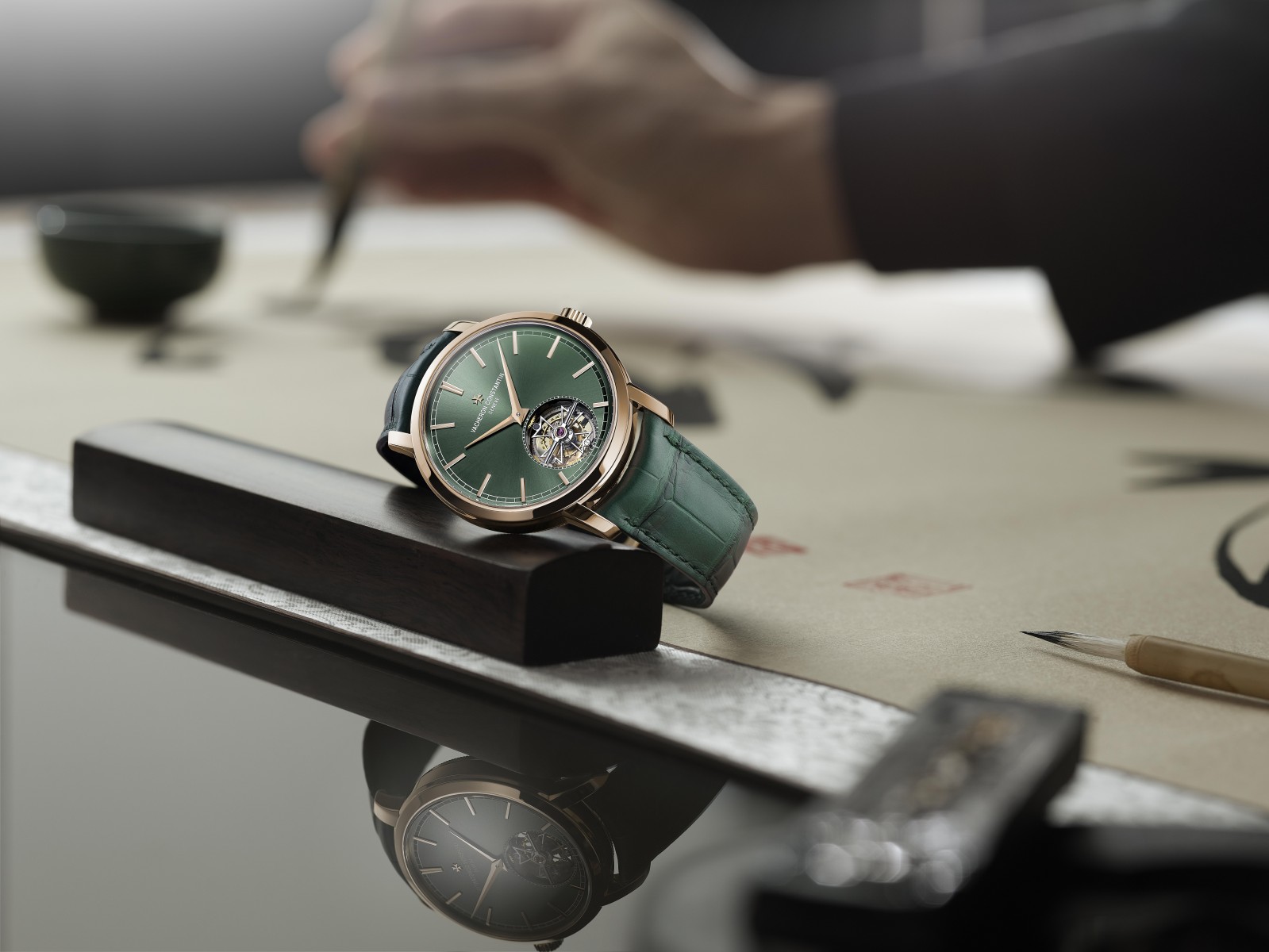 Geneva, November 29th, 2021 – Swiss Haute Horlogerie manufacturer Vacheron Constantin presents a high complication limited-edition timepiece, exclusive to the China market. The new Traditionnelle tourbillon combines aesthetic refinement and technical sophistication into a masculine presentation, echoing the old Chinese saying, “A Gentleman of Jade”. The in-house self-winding calibre is featured in a 41mm 18K 5N pink gold case, fully dressed in Imperial Green. The color of the dial and the strap draws inspiration from the long-standing Chinese Jade Culture, and pays tribute to the time-honored history of this Chinese aesthetic expression.

A Gentleman of Jade

“A gentleman of jade” is a well-known phrase since ancient China to describe a man with noble character. The Chinese believe that a real gentleman is elegant and dignified just as the Jade, which gives inspiration to the creation of the first high complication wristwatch specially designed for the China market. Considered as a mirror of Chinese civilization, Jade has been a treasure of Chinese tradition for thousands of years. This gemstone has been a symbol of high morality throughout Chinese history.

The color of green is described in Chinese poetry as gentle, soothing, and full of vigour and energy. Living in a green environment or adding touches of green to your surroundings can surprisingly bring sophistication, tranquillity and vitality to life.

The well-known Hongshan (Green) Jade Dragon from the Neolithic Period – the earliest known jade dragon carving in China – defines the imperial nature of Green jade carvings. In modern times, jadeite, a harder form of jade known by Chinese, is greatly appreciated for its gentle, translucent, luxurious, but not overstated color.

A jade’s quality is largely determined by the purity of its color. Imperial green, the color that Vacheron Constantin’s first high complication China Limited Edition wristwatch is dressed in, is known to represent the purest and most sophisticated shade of green jadeite, and has a sharp boldness while retaining being understated and warm.

In addition to the refinement of its openworked tourbillon carriage shaped like a Maltese cross, the emblem of the Manufacture and entirely hand chamfered and finished, Caliber 2160 is distinguished by its incredible slimness: this ultra-thin 188-part movement endowed with an approximately 80-hour power reserve measures just 5.65 mm thick. Its relatively sedate frequency (2.5 Hz), along with its 22K gold sandblasted peripheral oscillating weight, provide a chance to admire the steady beating of its mechanism and the exceptional level of traditional Côtes de Genève finishing visible through the sapphire crystal caseback.

The new Traditionnelle tourbillon China Limited Edition timepiece displays the hours and minutes with central hands, while the small seconds appear at 6 o’clock on the tourbillon, framed by an Imperial green-toned dial graced with gold hour-markers and bi-facetted Dauphine-type hands.

As an old Chinese saying goes, like the Jade, those who accomplish great things are modest about their capabilities. As the epitome of radiance, balanced proportions, and subtle details, the new Vacheron Constantin Traditionnelle Tourbillon China Limited Edition honors and interprets a Gentleman of Jade.

Technical refinement meets aesthetic elegance in this model imbued with exquisite masculinity. It represents the epitome of radiance, balanced proportions, and subtle details. Faithful to the origins of Vacheron Constantin and dedicated to Chinese clients enamored of beautifully crafted watches that are both understated and distinguished. Issued in a 30-piece limited series exclusively for Mainland China, it asserts the style in the accordant shades of green: from the elegant Imperial green-toned sunburst finishing dial to the Mississippiensis alligator leather strap with 18K 5N pink gold buckle. Powered by the in-house self-winding Calibre 2160/1, this Traditionnelle tourbillon watch displays the hours and minutes with central hands, while the small seconds appear at 6 o’clock on the tourbillon.

Our pick of top six great watches with incredible dials

Six Watches That Will Inspire You For 2022