Now four years old, Avantist was founded by Bruneian entrepreneur Keeran Janin and probably most famous for its tennis watches that incorporate string taken from the racquet used by Martina Navratilova when she won Wimbledon 1987. The brand has since diversified into other memorabilia timepieces, including one that contains strings from one of John Mayer’s guitars and another featuring threads from the national flag flown on the day of the Sultan of Brunei’s coronation.

But Avantist’s most interesting timepieces come from the series of tourbillon watches custom made for notable personalities, including sportsmen and heads of state; the first La Majesté Tourbillon – the name translates as “His Majesty” in English – was conceived for the Sultan of Brunei.

Powered by a hand-wound, skeleton movement from complications specialist Concepto, the tourbillon wristwatch is customisable in its entirety, from the case and movement material to the design of the barrel ratchet wheel. Though the La Majeste is yet another watch in the sporty-skeleton-tourbillon genre, it is more than just a familiar look; the watch combines an interestingly-constructed movement with a surprisingly light and tactile feel in the hand. 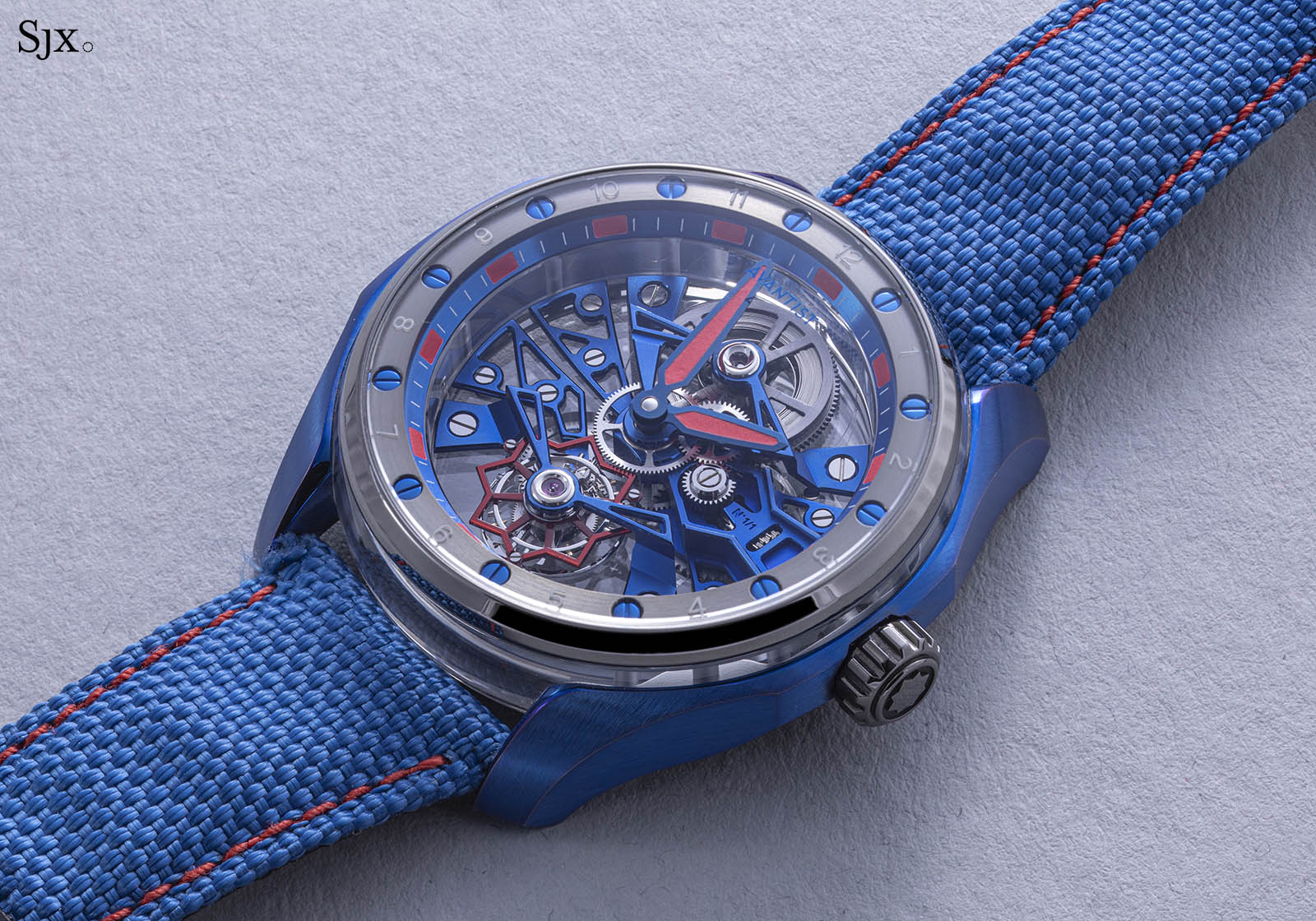 From design to production, the La Majeste Tourbillon is the work of leading names in Swiss watchmaking, most notably with Concepto supplying the movement. Best known for its various chronograph movements derived from the Valjoux 7750, Concepto was founded by a watchmaker whose family has a long (and occasionally controversial) history in movement production. The firm now produces a wide variety of movements, including several highly complicated calibres. And the styling is the work of Etude de Style, the Neuchatel design studio founded by Sébastien Perret, which has worked for brands like Audemars Piguet, H. Moser & Cie., and Krayon.

Measuring 44 mm, the case was designed to exhibit the movement: a clear sapphire middle with blue-coated titanium flanks that form a subtle octagon and protect the sapphire within. The sapphire middle helpfully reveals the profile of the movement, with the sides of the tourbillon visible even when the watch is on the wrist.

To secure the case vertically, the sapphire middle is sandwiched between a steel bezel and case back ring. The bezel is secured to the case by 12 blued screws – the eight closest to the titanium flanks are bolts that hold screws threaded through from the back, while the remaining four are decorative.

Because of the generous use of titanium – even the movement bridges are titanium – the watch is lightweight and easily wearable despite the size. And thanks to the hand-wound movement inside, the case is also relatively slim, standing just 11.95 mm high.

The barrel seen from 12 o’clock

Though there is comparatively little of it, the titanium case has been carefully and attractively finished. The flanks are brushed on the tops and sides, but accented with a subtle polished bevel on the inner edge that services to highlight and frame the dial. And the underside of the flanks sports a wide, polished bevel that helps to reduce the apparent height of the case.

Similar contrast finishing is employed on the bezel for the same purpose of highlighting the movement. The bezel has a polished outer slope and a circular brushed top surface that gives the watch a pronounced face, a crucial quality for a skeleton watch.

Since the primary appeal of such a watch is often in the look and feel, one might expect a merely-adequate movement. Fortunately, that is not the case.

The movement is derived from the Concepto cal. 8100 that was constructed from the ground up as a skeleton calibre. In other words, the bridges, base plate and smaller components were designed to be open-worked, instead of having material removed subsequently.

In fact, the movement features a sapphire base plate, which maximises transparency but supports the movement in the same manner as a conventional brass plate. Coupled with the sapphire case middle, the clear base plate creates the impression that the parts of the movement are floating.

Typical of Concepto’s tourbillon movements, the layout is almost symmetrical, with a large skeletonised barrel at 12 o’clock and a gear train continues downward to the tourbillon at six.

This iteration of the La Majeste features bridges of blued titanium, held in place with large screws that mirror the design of the bezel. Similarly, the skeletonised bridges are angular and geometric in shape, echoing the form of the case. The bridges have a frosted finish with polished bevels, adding depth to the movement.

Finished with a bright red coating, the tourbillon carriage is shaped like an eight-pointed star, inspired by the Rub el Hizb, an emblem comprised of two overlapping squares that is common in Islam, and consequently often found in Bruneian architecture. Mechanically, the tourbillon is conventional: it has a one-minute rotation and a balance beating at 3 Hz.

The exposed mainspring in the open-worked barrel

The trademark Concepto design elements in the movement are only visible from the back. They are the elegantly shaped keyless works that are visible through the sapphire plate and sit just above the crown wheel. Instead of a short and functional spring, the keyless works incorporates an elongated and elaborately shaped spring resembling tentacles – and finished with a straight-grained top surface and polished bevels.

While technical-looking skeleton watches are improbably numerous, the La Majesté Tourbillon stands up to scrutiny surprisingly well. Even though its overall aesthetics can be polarising, the case and movement are thoughtfully designed and well-constructed, featuring subtle nuances that are immediately apparent but become appreciable over time.

More importantly, it manages to be distinctive in style, instead of resembling a Richard Mille or Hublot or Audemars Piguet – a feat in this segment. And though the La Majeste is an expensive watch, it is comparably priced to comparables, while offering substantial personalisation.

Availability: Direct from Avantist
Price: Between 147,000 to 262,000 Swiss francs, depending on customisation