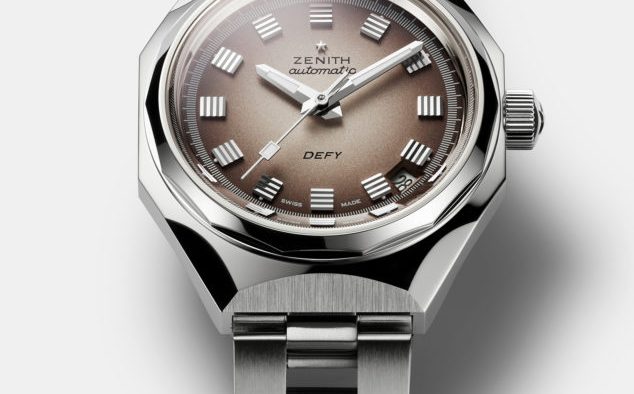 The year 1969 was a pivotal one for Swiss watchmaker Zenith, which famously introduced its history-making, high-frequency chronograph caliber, the El Primero, to a worldwide audience in January of that year. The El Primero and the Chronomaster watches in which it was first installed have largely defined Zenith’s identity since then, but another important branch of the Zenith watchmaking tree also sprouted in 1969, namely the original Zenith Defy series, whose bold, edgy design found its expression in the now-legendary Ref. A3642. After devoting much of 2021 to expanding the modern Chronomaster family, Zenith kicks off its 2022 product launches with a contemporary reproduction of that model, the Defy Revival A3642.

The first Defy wristwatch, which revived the Francophone “Défi” moniker that Zenith had used for pocketwatches as early as 1902, commanded attention with its unconventional octagonal case and 14-sided bezel, sharply defined lines and facets, and a steel “ladder-style” bracelet from the famed Gay Frères firm. Its robust, highly geometric design, with a screw-down crown to secure a 300-meter water resistance, earned it the French nickname “coffre-fort,” which translates to “bank vault” or “safe deposit box.”

The Defy Revival A3642 reproduces the primary elements of its predecessor in impressively period-accurate detail thanks to Zenith’s watchmakers using the original production plans from 1969. The warm gray dial has a gradient effect that darkens toward the edges, a now-popular visual motif that the original model was among the first to introduce to the watch world. The dial features the same applied square hour markers with horizontal grooves, wide sword-shaped hands filled with a Super-LumiNova whose color approximates that of the Tritium used on the vintage watch, and a paddle-shaped central seconds hand.

Other than the luminous material on the dial, the only other significant aesthetic change from the original model is the use of a sapphire exhibition caseback rather than the solid one with the engraved four-pointed star logo that served as a longtime Zenith emblem. Revealed behind the caseback window is the movement, Zenith’s automatic in-house Elite 670, which beats at a frequency of 28,800 vph and stores a 50-hour power reserve when fully wound. The movement, essentially a simpler, time-and-date-only sibling to the El Primero chronograph movement, uses silicon for its escape wheel and lever.

Zenith says that the Zenith Defy Revival A3642, which follows up similar Revival models last year from the sister Chronomaster collection, will serve as the opening act for a next-generation Defy collection to be unveiled next week during LVMH Watch Week. Stay tuned.