Zenith Introduces the Defy Skyline, with Another Variation on the El Primero Caliber

Zenith Introduces the Defy Skyline, with Another Variation on the El Primero Caliber 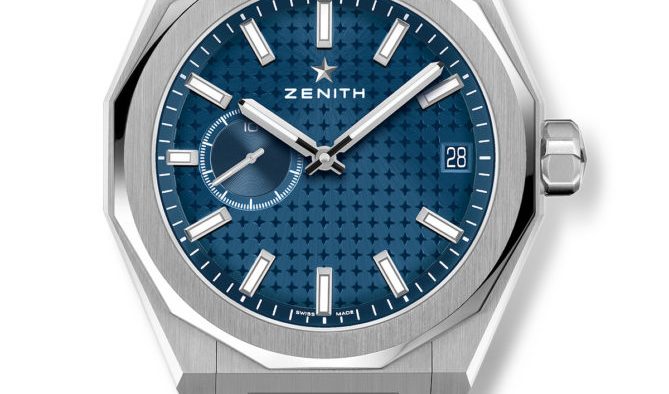 With the recent release of its Defy Revival A3642, Zenith hinted that it would be turning the spotlight on its avant-garde Defy collection, at least in the early part of 2022, after a 2021 filled with interesting variations on its Chronomaster line. The main event occurred at the kickoff of the virtual LVMH Watch Week launch event, as Zenith unveiled the Defy Skyline, a new model that re-imagines the octagonal-shaped “bank vault”case of the original 1969 Defy and adds an all-new version of the El Primero caliber that powers the dial’s unique 1/10th-second subdial.

Distinguishing the Defy Skyline from both the Revival piece that preceded it and the existing watches in the modern Defy collection is, first and foremost, its star-pattern dial, whose surface is studded with engraved four-pointed stars, a visual tribute to the historical Zenith “double-Z” logo of the 1960s. Why a star-themed logo in the first place? Zenith founder Georges Favre-Jacot, who is said to have taken the night sky as a major inspiration, named his watch company after the highest point that starry firmament. On the new Defy Skyline models — whose geometric, architectural forms and metallic surfaces evoke images of city skylines — the dial pattern adds an intriguing sense of depth. The other feature of the Defy Skyline’s dial that makes it special, though perhaps not so evident at first glance, is the small seconds subdial at 9 o’clock, whose steadily jumping hand completes one revolution every 10 seconds rather than every 60 seconds — an unusual and dynamic display derived from the 1/10-second frequency bestowed by the El Primero caliber inside.

The 41-mm case is made of stainless steel and is topped by a sharply defined, faceted stationary bezel that resembles those of early Defy models, with 12 sides positioned to align with the dial’s hour markers. A screw-down crown with a Zenith star emblem helps secure for the case a water resistance of 100 meters. Inside it beats the new movement, El Primero Caliber 3620, which is a re-engineered version of the famed high-frequency chronograph movement. There are no stopwatch functions in this version but its escapement, which oscillates at 36,600 vph (5 Hz) directly drives the motion of the constantly running seconds hand as seen on the dial. In addition to this “natural” 1/10-second indication, the movement is equipped with a stop-seconds mechanism for precise time-setting. Finished in tones of silver and gray, with areas of blued metal and a bidirectional star-motif rotor, the caliber delivers a power reserve of approximately 60 hours and is visible behind a sapphire exhibition caseback.

The Zenith Defy Skyline comes in three dial colorways — silver, blue, and black — and is mounted on either a steel bracelet with satin-brushed surfaces or a rubber strap with the same starry motif as the dial — blue for the blue dial, black for the black, olive-green for the silver. Prices have yet to be announced.