Into the Blue: Reviewing the Rolex Deepsea D-Blue

Into the Blue: Reviewing the Rolex Deepsea D-Blue 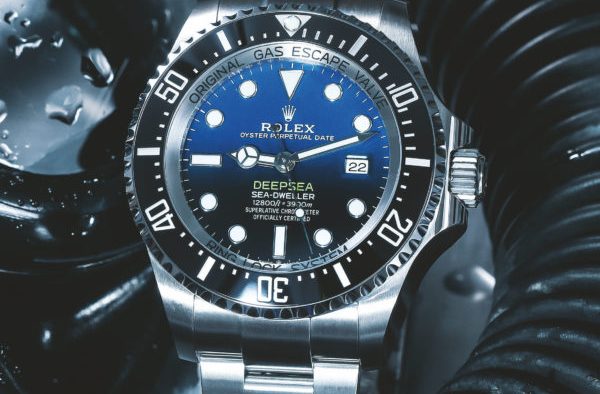 When writer, director, and adventurer James Cameron reached the beginning of the “deep sea” at a depth of 1,000 meters on March 26, 2012, safely inside his submersible craft Deepsea Challenger, all the remaining light disappeared. But at that point, he hadn’t yet completed one-tenth of his journey. At 10,908 meters, he landed softly on the floor of the Challenger Deep, the deepest point in the ocean, at the bottom of the Mariana Trench. Before the hydraulic arm on the submersible malfunctioned, he was able to collect a sample from the bottom of the sea. The Rolex Deepsea Challenge, a prototype watch that could withstand water pressure to a depth of 15,000 meters, was strapped on the mechanical arm as well as on Cameron’s wrist.

Only two other people had preceded Cameron in this endeavor – in 1960, Jacques Piccard and Don Walsh reached this point with their underwater craft, Trieste. Then, too, an experimental dive watch from Rolex, the Deep Sea Special, was attached to the outside of the pressurized chamber, and it withstood the dive in 1960 as unscathed as the Deepsea Challenge did in 2012.

Neither watch was ever commercially produced. The Deep Sea Special was virtually unwearable because of its enormous 35-mm thickness and domed, semi-spherical crystal above the dial. The second version was considerably smaller. It was based on the innovative case structure introduced in 2008 for the mass-produced Deepsea model, which has pressure resistance to a depth of 3,900 meters.

In 2008, the Deepsea was the most pressure-resistant mechanical commercial watch available. Since then, manufacturers such as Vintage VDB and CX Swiss Military Watch have been making watches that can withstand even greater depths (and Omega’s Seamaster Ultra Deep has since exceeded the Deepsea’s depth record by several precious meters), but they tower over the wearable 18-mm-thick Rolex Deepsea by at least 6 mm and appear clunky.

In 2014, Rolex introduced a special version of this extreme dive watch with a “D-Blue” dial as a tribute to Cameron’s deep dive. Instead of the completely black dial, this watch has a dial that gradually changes color from dark blue to black, the way the ocean gets darker as it becomes deeper. The Deepsea lettering on the dial is the same green color as the paint on Cameron’s submersible. While the standard Deepsea model was not overly popular, demand for the D-Blue has greatly exceeded supply, in spite of its higher price.

In 2018, Rolex modified both versions of the Deepsea and we tested the D-Blue model. While the most obvious difference is the wider bracelet with its larger folding clasp, overall, the proportions have a more harmonious feel. The bracelet end pieces no longer protrude above the lugs. Another new feature is a tiny Rolex crown placed at the edge of the dial at 6 o’clock between the words “Swiss” and “made.”

Rolex also tinkered with some of the smaller details. the distance between the case and the bezel has been reduced, which limits the amount of dirt that can penetrate into the watch. The round luminous marker on the bezel is also not as tall and is, therefore, less susceptible to damage. The bracelet has been redesigned to be more supple and comfortable.

Producing an extremely pressure-resistant watch is actually not extremely difficult. The thickness of the case walls and the external dimensions can be increased to the point where a watch can be made with very high water resistance. But Rolex did not approach the problem this way. From the beginning, the Deepsea engineers’ goal was to create a wearable watch. They found success using a diameter of 44 mm and a thickness of 18 mm, which is also very comfortable to wear.

This required a completely new redesign of the case structure – resulting in the Rolex-developed and patented “Ringlock System.” The system consists of three elements that absorb pressure: the 5.5-mm-thick sapphire crystal, the 3.28-mm-thick caseback made of Grade 5 titanium and the inner ring of Biodur 108 steel. The system is surrounded by a 904L steel Rolex case. The titanium caseback is not screwed down but is pressed onto the inner ring by a threaded ring made of the same steel as the case.

The materials are carefully selected for their extreme sturdiness and resilience so that they do not become distorted or break under pressure. Biodur 108 is approximately three times more tension proof than the steel used for the case, and Grade 5 titanium – a titanium alloy with vanadium and aluminum – is four times as strong. This complicated construction allows a case to be made that is more than 10 percent thinner than a conventional one. The Deepsea is actually designed for a water depth of 4,900 meters, and every watch is tested underwater at this 25-percent higher pressure. Rolex consulted with the French diving equipment company Comex for the design of its water pressure testing instruments.

The steel alloy used for the Deepsea is very well suited for deep sea diving. Both the bracelet and the case of the Deepsea are made of 904L steel, which Rolex calls “Oystersteel.” It is more difficult to process but is less susceptible to saltwater corrosion than the 316L steel that is usually used for watches. In addition to the 1.8-cm fold-out extension of the Fliplock bracelet, the Glidelock clasp also has a 1.8-cm extension piece. This is convenient since the bracelet can be lengthened quickly when the temperature rises. This mechanism can even be used while wearing the watch on the wrist.

Rolex has given the entire top of the case and bracelet a brushed finish. The sides are highly polished, and the scratch-resistant high-tech ceramic track ring on the unidirectional rotating dive bezel shines, too. The numerals and indexes are milled and are coated with platinum. The color of the bezel varies between black and anthracite, depending on how the light hits it.

The now-complete minutes track is appealing to divers and others alike. Rolex has also set the benchmark for bezels – with smooth and solid ratchets in half-minute increments that sound firm and precise when turning.

The crystal of the Deepsea does not extend as far above the bezel as on other Rolex models, which helps prevent damage. Unfortunately, the crystal reflects light under some conditions. But the color change on the dial does not affect its legibility.

The hands are slightly curved and, therefore, don’t appear black, as some at hands do. The hands and markers are made of gold, as is always the case with Rolex. The design – with the “Mercedes” hand for the hours, the round hour markers, the bar markers at 6 and 9 o’clock and the triangle at 12 o’clock – basically comes from the first Submariner. Rolex has maintained continuity for over 60 years. What could possibly be improved in terms of functional or aesthetic design?

The luminous material on the hands, markers and zero marker on the bezel have a blue glow. The advantage for divers is that water absorbs long-wave light better than short-wave light, so blue light is the easiest to see underwater. The Deepsea has a timeless look, despite its historical dial design. This is due to its contemporary size, domed crystal, high-tech bezel and visible inner ring of the Ringlock System. The iconic Rolex text on the dial remains a matter of taste. The Deepsea D-Blue dial is wordier than ever. There are five lines of text just on the lower half of the dial, plus the information on the inner ring. But this doesn’t impact the successful evolution of this design.

As with the design, little improvement needed to be made to the movement, but Rolex did a basic reworking of the caliber that was already known for its sturdiness and accuracy, Caliber 3135. Caliber 3235 replaces the 3135. In 2015, Rolex began introducing the new generation of calibers in its updated models. Among its steel watches, it has been placed in the new Sea-Dweller and in the new GMT-Master II with the blue-red bezel, in addition to the Datejust. With Caliber 3235, only 10 percent of the components of the 3135 remained unchanged. Overall, Rolex has received a total of 14 patents for this caliber.

How does this benefit the wearer? Resistance to impacts and reliability are increased. The winding mechanism is more efficient and builds up its power reserve more quickly, primarily due to the new ball-bearing oscillator. Most of all, the maximum power reserve has increased from the standard 48 hours to 70 hours. Rolex has achieved this through the use of a thinner barrel wall, which permits the use of a longer mainspring, as well as with its innovative Chronergy escapement, which increases the efficiency of the Swiss lever escapement by 15 percent. This is made possible by modified geometry and a skeletonized shape that reduces its weight. The light-weight escapement is also notable for its much quieter ticking sound.

The nickel-phosphorus alloy escape wheel is produced using the LIGA process (the German acronym for lithography, electroplating, and molding) and has no reaction to magnetic fields. The new balance staff also improves magnetic field protection. The blue Parachrom hairspring made from a niobium-zirconium alloy is already familiar from other models, as is the Paraflex shock absorber. The end shake of the balance can be adjusted with one screw instead of two. And the overcoil ensures concentric breathing of the hairspring, as does the free-sprung oscillator with Microstella screws.

Although the new caliber works beneath a solid steel caseback, like all Oyster models, it is decorated – with a sunburst finish on the partially skeletonized oscillator, and on the automatic bridge, matte line finishes on steel components, along with some beveled edges and polished screw heads.

In 2015, Rolex introduced stricter regulations for all its models. In addition to chronometer certification from the independent Swiss testing agency COSC, which tests the movement, Rolex watchmakers regulate the cased movement to even more precise values: the rate may deviate no more than between -2 and +2 seconds per day. A specially designed system that simulates actual wearing conditions is used.

Our test watch easily achieved these values on the timing machine. The average deviation measured at only -0.7 seconds per day, and the greatest deviation was only 4 seconds. When worn on the wrist, the watch showed only slight gains or losses, so on average, this resulted in virtually no deviation.

Thanks to its high degree of wearing comfort, the Deepsea D-Blue works as an excellent watch for daily wear, which is rather unexpected for such an extreme model. And the price? It’s $12,550 – pretty high for a steel sports watch. In contrast to the Rolex Submariner Date – with a water resistance rating of 300 meters and the older movement at a cost of $8,550 – this is a hefty difference. Compared with the newly revised Sea-Dweller, which is water resistant to 1,220 meters with the new movement and a price of $11,350, the additional cost is less noticeable. Overall, the price of the Deepsea is fair.

Whether you’re willing to spend $300 more for the D-Blue that we tested over the Deepsea with a black dial is simply a matter of individual taste. In our opinion, the blue version has greater character that sets it apart from the other Rolex dive watches. Revision was a great advantage for this watch. More consistent proportions and the higher power reserve may inspire you to dive into greater adventures.