From the Seas to the Skies: Hands-on with the Bremont Supermarine Chrono

From the Seas to the Skies: Hands-on with the Bremont Supermarine Chrono 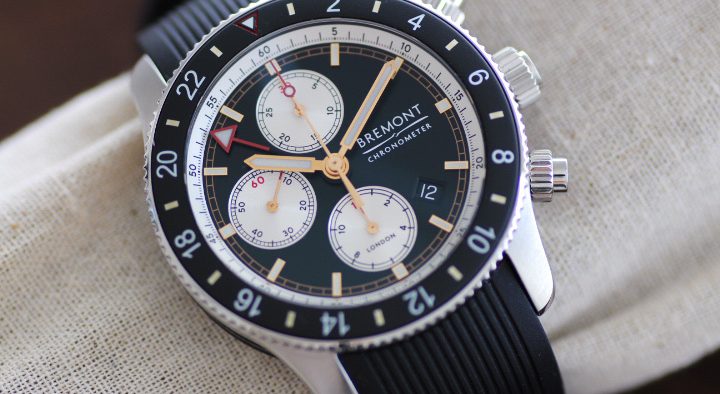 As British watchmaker Bremont begins unveiling its novelties for the year, let’s take a look back at some of its most notable launches of last year. Leading the pack is a Spring of 2021 launched, updated version of the brand’s popular, vintage-influenced Supermarine dive watch that added a new GMT function. Which, alongside that highly praised piece was the model we had a chance to go hands-on with recently, here: the Bremont Supermarine Chrono.

The watch uses the same diving-inspired base design as the rest of the Supermarine series but transforms it in a new way, adding the namesake chronograph function as well as the useful GMT feature. This is the first time Bremont has unveiled a chronograph, let alone a GMT-chronograph, within the Supermarine line, and like the rest of the collection it has been performance-tested for the most extreme of activities.

For our review, we procured the black-colorway version of the watch on a textured rubber strap, though it also comes in a blue variation as well as on a steel bracelet. Its case is substantial, measuring 43 mm in diameter, and somewhat tall on the wrist at 15.87 mm. While it’s sitting high, the case is by no means overbearing, as it seems to condense its diving, GMT, and chronograph aspects all into a manageable package.

Like previous models in the Supermarine line, the watch features a layered “Trip-Tick” case construction, with brushed and polished steel sections on its top and bottom sections, while a scratch-resistanct, PVD-treated case barrel provides for the bulk of the look. On its right side, two screw-down chronograph pushers flank a screw-down, Bremont signed crown, while over the top of the 200-meter water resistant watch is a 24-hour, bidirectional bezel to keep track of a second time zone.

Peering underneath the sapphire crystal, we come to a black-and-white dial, accented throughout with spots of red, gold, and silver. Along the outermost edge is a curved, chronograph-style minute ring outlining the surface and giving way to applied, lume-filled rectangular hour markers connected via a gilded railroad style minute ring. This design is broken up at each quarter hour, with Bremont’s logo at 3 o’clock, a 12-hour counter at 6 o’clock, running seconds at 9 o’clock, and a 30-minute counter at 12 o’clock. The watch also hosts a small, bevel-edged date window at 4:30, tucked away so as not to overcomplicate the already relatively busy look of the dial. In the center of the matte surface are two gold-colored sword hands for the hours and minutes and a red-tipped lollipop counter for the chronograph seconds, and a prominent, red-tipped arrow to indicate the second time zone. Taken as a whole, the watch takes some time to learn to operate, but once that’s accomplished it presents a very useful set of features.

Powering the new sports chronograph is the chronometer-certified La Joux-Perret Caliber 7754. The movement, a base chronograph caliber with an added GMT module, has been dubbed Caliber BE-54AE by Bremont. The automatic mechanism amasses a 42-hour power reserve, beats at 28,800 vph, and is visible with its partially skeletonized rotor and perlage finishing behind a clear sapphire caseback.

Overall, the new Supermarine Chrono seems to settle firmly and seamlessly into the larger Supermarine collection. With its hardy, diver-style case and host of useful functionalities, it presents itself well as a solid do-everything sports watch. Others, especially those who prefer a simpler look with a potentially longer power reserve, may still opt for a more standard time-only model in the line, or even a chronograph diver sans GMT, but for a select few, this Supermarine Chrono may be hard to resist.

The Bremont Supermarine Chrono is available now directly through the brand, priced at $6,795 on a rubber strap and $7,395 on a steel bracelet.

To learn more, you can visit Bremont, here. More hands-on photos, in the gallery below, can be enlarged with a click.