The world of independent watchmaking, we have seen some interesting offerings in recent years. The proposition of relatively affordable pieces makes it an even more tantalising prospect. Kudoke, the eponymous brand of Stefan Kudoke, is one of such propositions. Here is our review of the Kudoke 2. Hailed from the town of Dresden, the German-based independent watchmaker runs a small operation that produces timepieces in small quantities. We understand that Stefan is the only watchmaker in the atelier, and he is assisted by a part-time watchmaker several days a week.

Stefan began his watchmaking journey at a young age. Prior to setting up Kudoke, he had various stints at Glashütte Original, Jaquet Droz, and Breguet, Blancpain, and Omega. In addition, he also attained his Master Craftsman Certificate at the age of 22. Brilliant!

The HANDwerk collection, which houses the Kudoke 1 and 2, was launched in 2019. This was following the introduction of Kaliber 1, a movement that he had produced in collaboration with Habring2. The HANDwerk collection is the second collection of the brand, which was preceded with the KUNSTwerk collection. The latter features extensive engraving work on skeletonised timepieces, which is what Stefan was more known for previously.

The Kudoke 2 is one timepiece that had caught our attention. It has a slightly unusual design, with stunning details to match. And when the opportunity came for us to take it for a short-term loan from a friend of Deployant, we certainly could not turn that down. 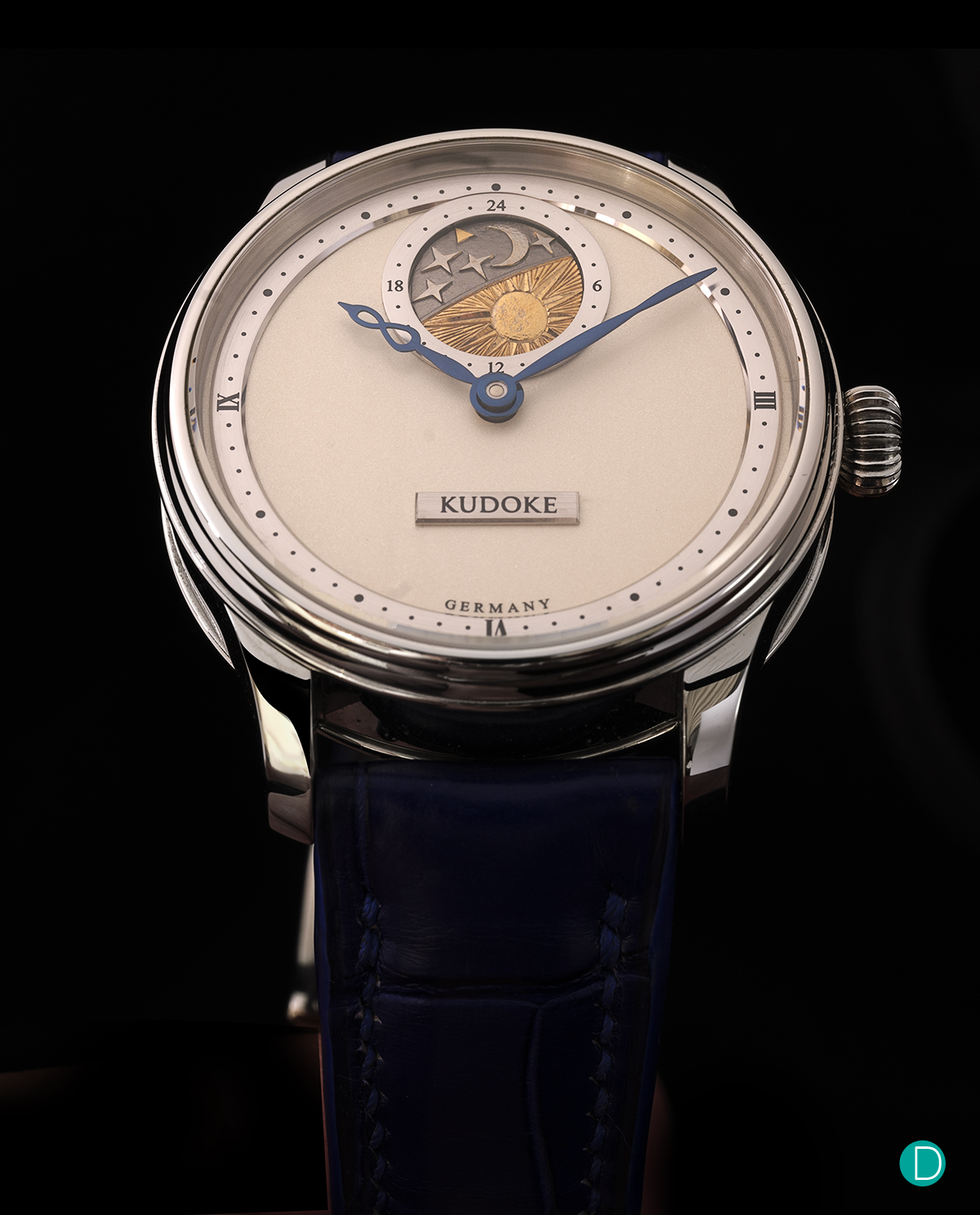 The 39mm Kudoke 2 is a time-only watch, with nuggets of small details that springs surprises for its owner. 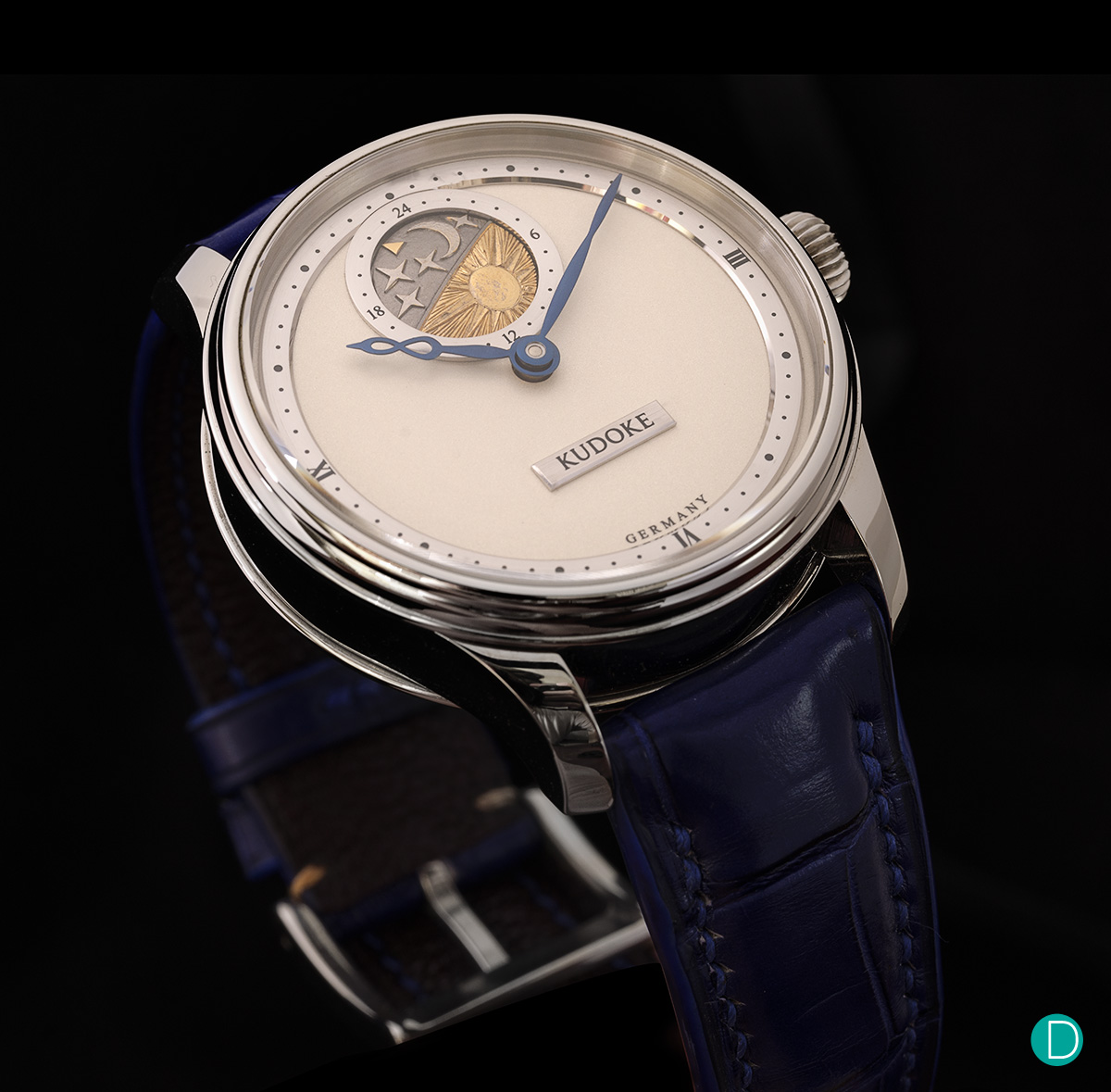 We begin with the stainless steel case, where it features a well-sculptured stepped bezel and a large onion crown. Notably, the bezel and case-back are made slightly larger, which gives the impression that the mid-case is tapered. This creates an interesting case profile, and it is actually a joy to run the fingers along the case to feel the smooth crevices and edges. 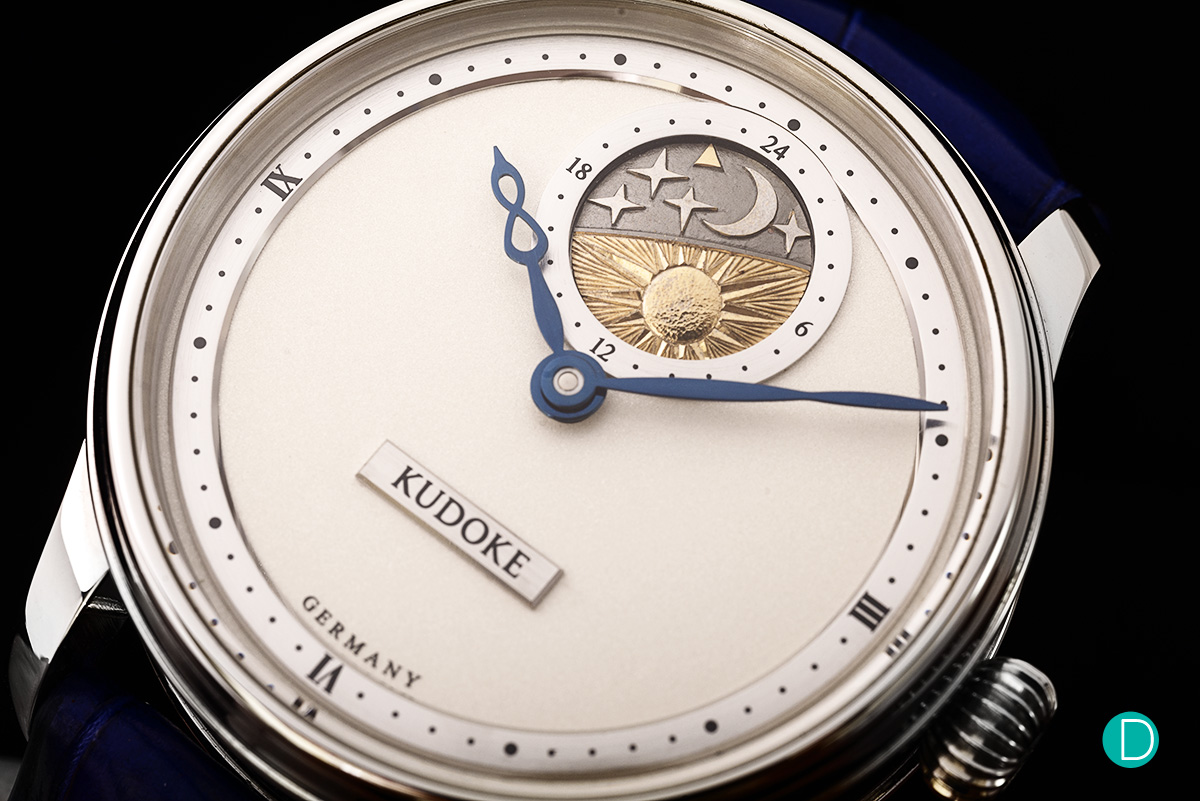 Moving on, the dial is perhaps another intriguing feature of the watch. The base of the dial is frosted, which gives it an effect that is not dissimilar to the Snowflake – albeit at a finer level. The dial is even more stunning when it shimmers under the sunlight.

Lying atop the frosted base is perhaps the most striking element of dial, and that is the 24-hour indicator at the 12 o’clock position of the watch. The domed rotating disc has a day and night motif, represented by the sun and the night-sky (moon and stars) respectively. The disc is plated in gold and rhodium, and it is hand-engraved by an artisan in Glashütte. This is certainly a stunning work of art and a delight to peruse.

The dial is also accompanied by a chapter ring that displays the minute and hour markings. This, together with the name plate, features a brushed finish on the surface and bevelling at the peripheral. We think that the attention to detail here is amazing, and it adds a nice touch to this timepiece. 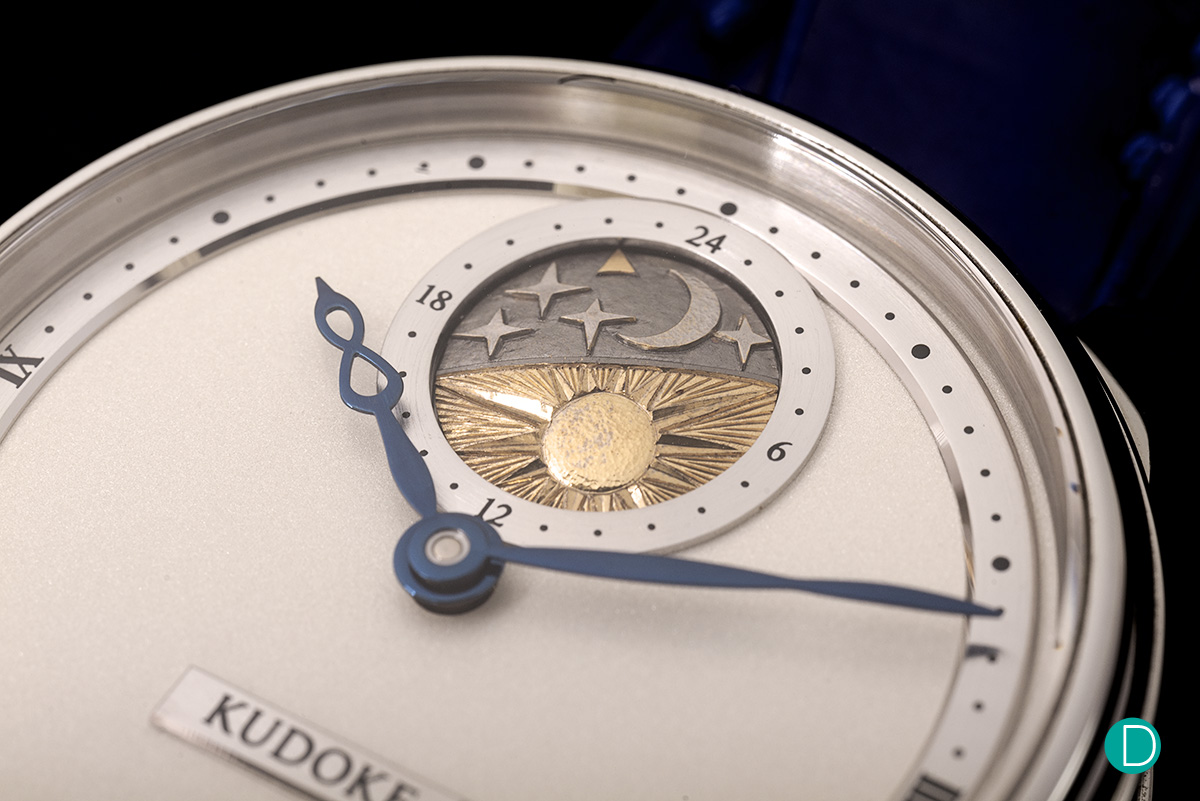 Finally, we round it up with a pair of blued hands that are shaped atypically. The hour hand has an “infinity” motif, while the minute hand is formed with smooth and sensual curves.

The overall combination is stunning, and we like how Kudoke had paid attention to minute details on both the dial and case. This is the what makes watches from independent watchmakers so special and precious – the tiny little Easter eggs that were included make the watch such a joy and pleasure to wear and stare. 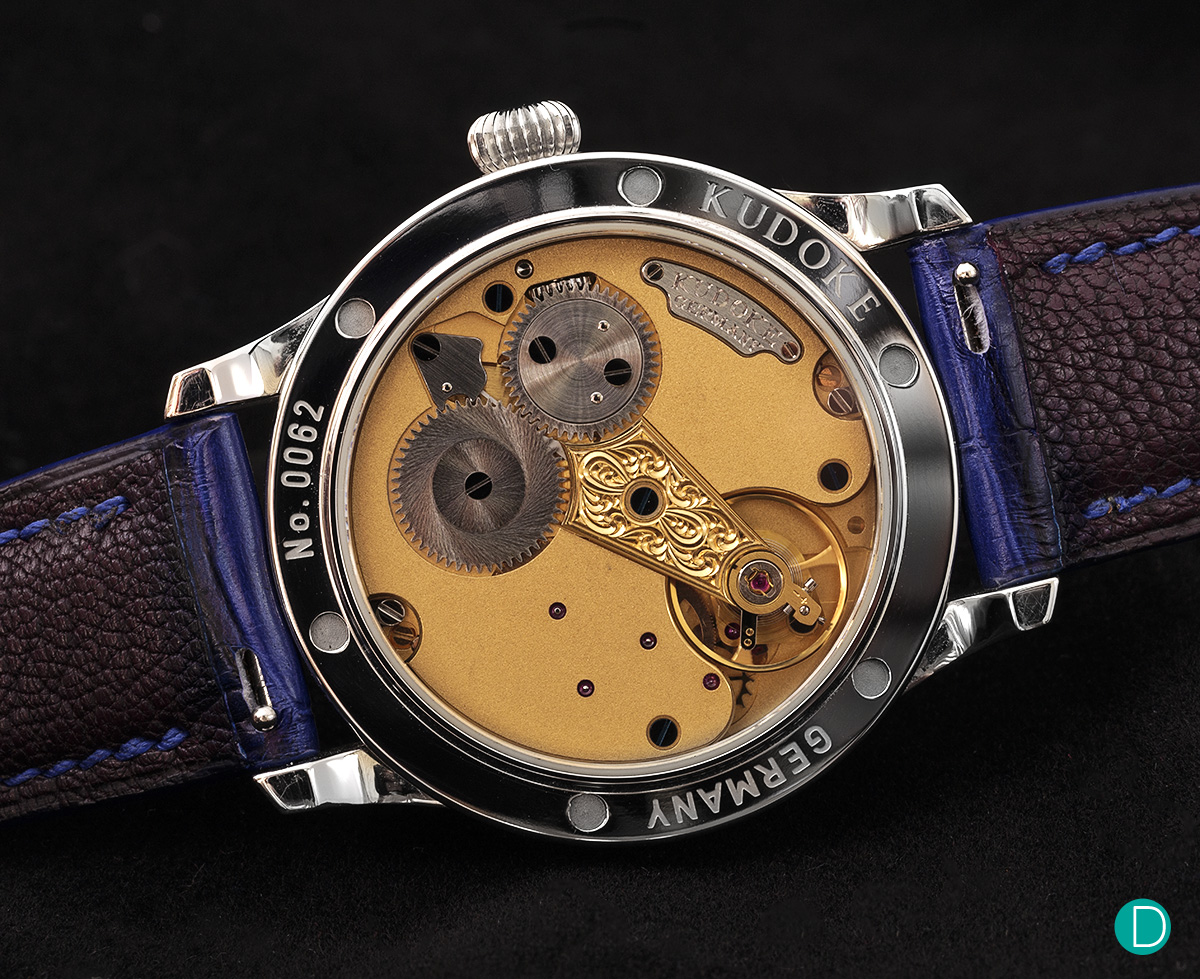 Just when you thought the dial was amazing, the movement on the reverse side takes it up a notch.

The gilded Kaliber 1 is a hand-winding movement, produced in collaboration with Habring2. Notably, the movement shares many components with Habring2’s Felix movement, but the finishing and assembly is done all in-house by Kudoke and his small team. 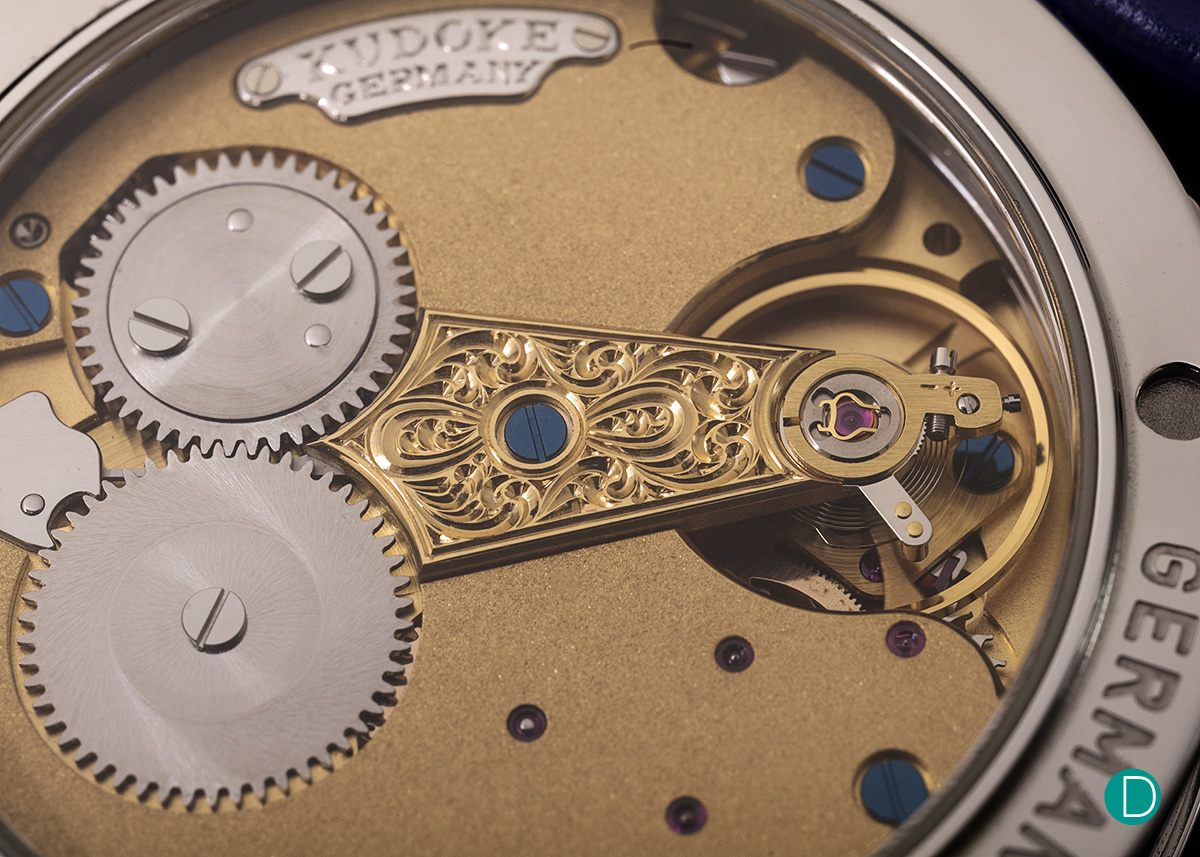 At the first glance, the most striking feature is perhaps the engraved balance cock and both the crown and ratchet wheel. The phallic symbol is definitely a talking point, and it adds a light-touch to the watch. It also adds an element of symmetry to the movement as well.

However, do not let that distract you from the rest of the movement. The finishing on the watch is absolutely incredible. The frosted gilt bridge fills a large portion of the movement, and we learnt that the finishing is a result of hand graining. Other finishing techniques include bevelling at the edges, as well as hand-engravings on the balance cock and name plate. To simply put, the entire movement is a visual treat.

In terms of performance, the Kaliber 1 is no slouch either. It has a power reserve of around 46 hours, and it beats at approximately 28,800 bph. The Kudoke 2, as mentioned above, has an additional 24-hour indicator. 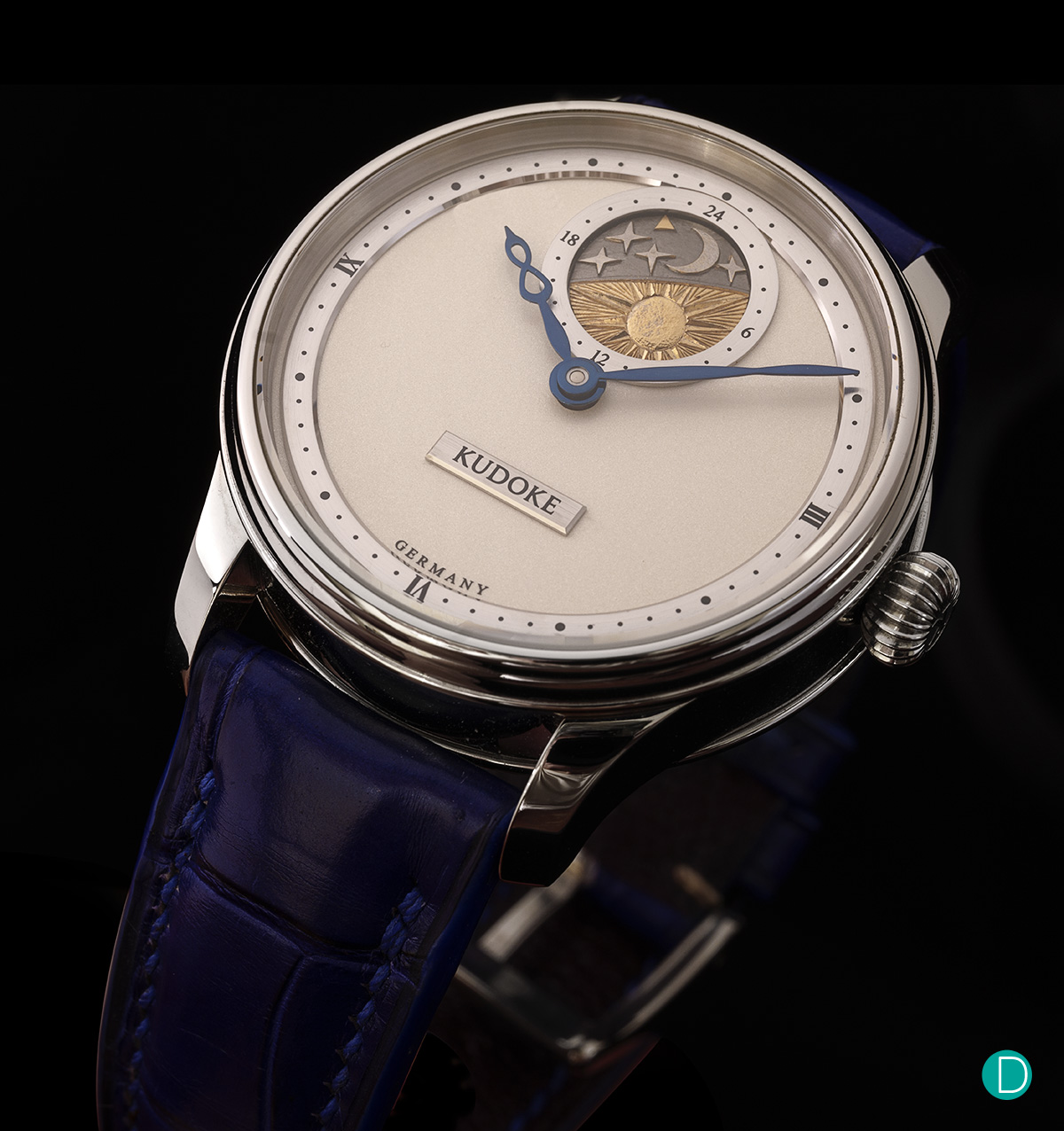 The Kudoke 2 is priced at €8,665 (approximately S$14,018). For a timepiece from an independent watchmaker at this price point, the Kudoke 2 certainly offers tremendous value with its level of detail.

In the competitive landscape, there are certainly some strong competition from other independent watch manufacturers who produces watches at this price range; each with their own style and nuances. 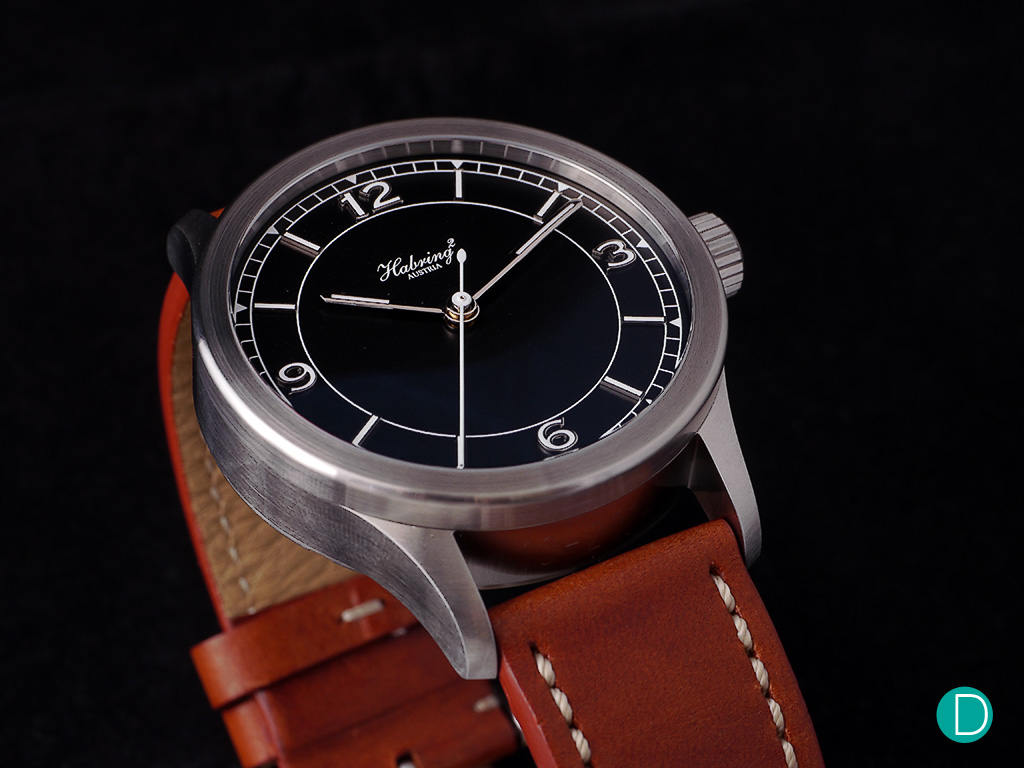 Habring2 is one of the first names that comes to mind, on the subject of modestly priced watches from independent watchmakers. A husband and wife outfit, Habring2 is one of the pioneers that made independent brands more accessible to collectors. The 42mm Jumping Seconds Pilot is an example, where it features the dead beat seconds complication (akin to a quartz movement, although this watch achieved a similar result with a mechanical timepiece). The last known retail price is US$5,300 (approximately S$7,270), which makes it a relatively accessible piece for collectors to join the highly exclusive club.

The Czapek Quai des Bergues collection is another interesting piece as well. Based on a Czapek 3430 that was made in 1850s, the dress watch features a beautiful dial and a well-finished movement, with the latter boasting a power reserve of around 168 hours. The manufacturer offers many different variations of the watch, and the stainless steel version (with a smaller 38.55mm case) is priced very reasonably at CHF 11,500 (approximately S$17,310). We like the story behind this watch, and we do think that Czapek is another entry-level independent watchmaking brands that collectors should consider if they were to start looking at collecting such watches. 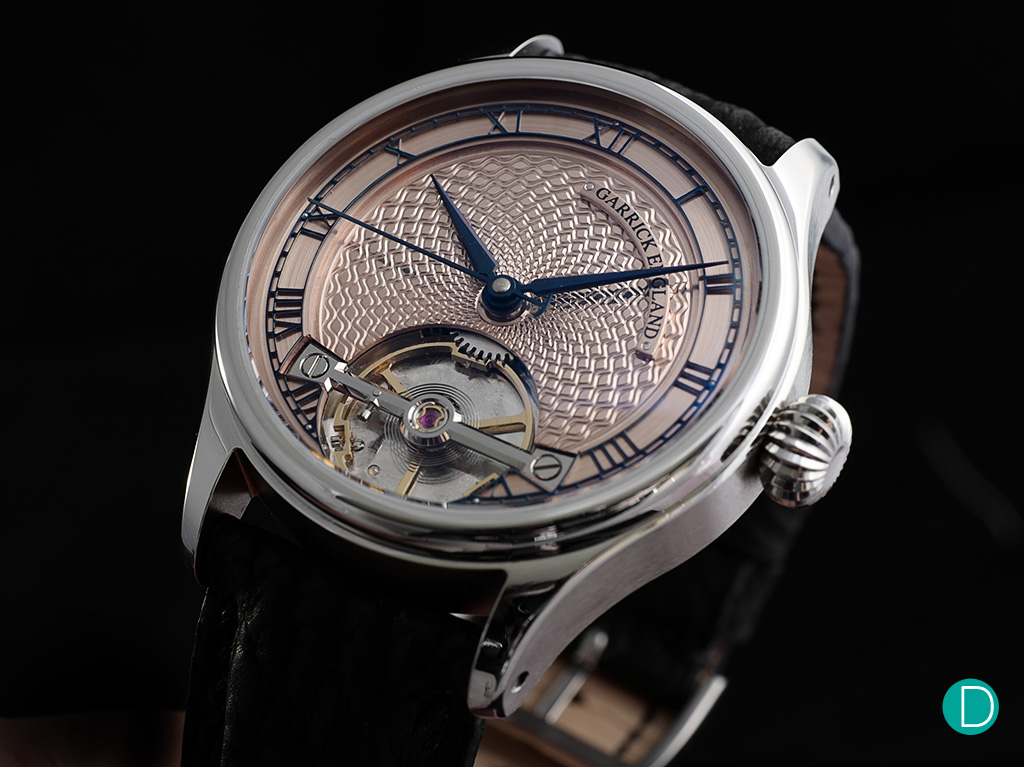 Finally, we have the Garrick Series 2, from England. This is another well-made timepiece, featuring some nice finishing on both the movement and the dial itself. The concept of incorporating “British craftsmanship” into their timepieces is interesting as well. The Series 2 is priced at £14,995 (S$26,841) for the stainless steel version. A slightly different timepiece with an English touch, but a great one nonetheless.

The Kudoke 2 is indeed a special timepiece. Every element – from the finishing and design, to execution – is truly top-notch. This is even more impressing, considering the small outfit that Stefan Kudoke is running.

Frankly, the Kudoke 2 represents and epitomises our ideals of watches from independent watchmakers. The idea of doing simple things right, and making ordinary components extraordinary. The 24 hour indicator is an example, with the elaborate engravings and rhodium/gold plating. The same goes for the movement, with various polishing techniques and hand-engraved parts that elevates the watch to the next level. The best part of all – it is priced relatively modest as compared to its counterparts that offers products of a similar virtue.

Note: The Kudoke 2 belongs to a good friend of the author, who bought the watch after chancing upon the brand and the philosophies behind the watchmaker and his creations.