Breguet and tourbillons. You can’t really speak of one without mentioning the other. This is unsurprising given that it was Abraham-Louis Breguet who invented (and patented) the mechanism at the dawn of the 1800s. Some of the brand’s most breathtaking timepieces today are tourbillon watches. Take for example the Tradition Fusée Tourbillon, or the Marine Tourbillon Équation Marchante, both of which are titans in the industry. In 2013, Breguet introduced the Classique Tourbillon Extra-Plat Automatique 5367 and at that point in time, it was the world’s thinnest self-winding tourbillon wristwatch. Numerous variations have been presented since, and although it has lost its record as the thinnest, the reference just keeps looking better and better with each new iteration. This year, the Classique Tourbillon Extra-Plat Automatique 5367 gets a contemporary makeover with a new grand feu enamel dial in blue. And spoiler alert: it’s a doozy. No changes have been made to the casing of the new Classique Tourbillon Extra-Plat Automatique 5367. It is still the same case rendered in platinum, and packed with Breguet signature design elements such as the straight lugs and the fluted band. As the name would suggest, the case is also incredibly thin at 7.45 mm in height, enabling the watch to slide under even tightest of dress cuffs with ease. 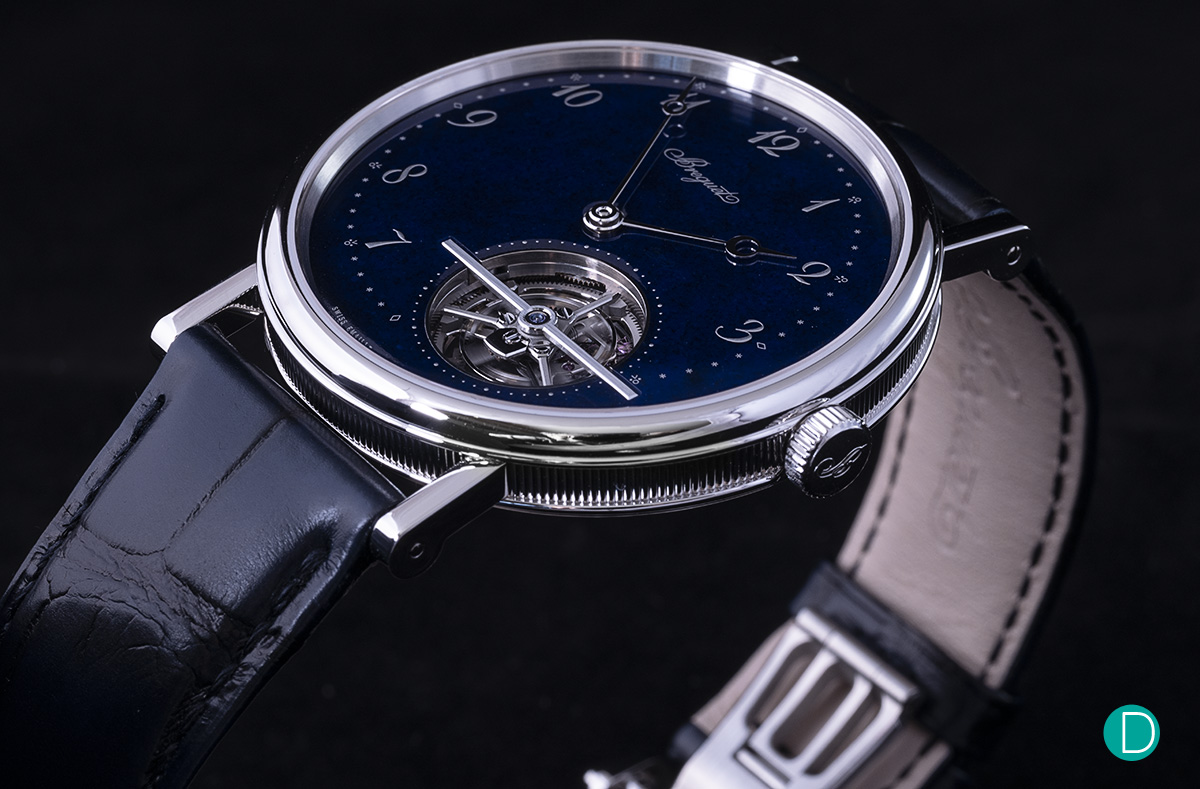 Screw-pins, rather than the more usual sprung bars, hold the strap between the horns, a solution that is not only better looking but also more secure.

Apart from its modern 41 mm case diameter, the only other thing that would ‘betray’ the otherwise classical demeanor of the watch is its dial colour. Previously executed in traditional white, the new Classique Tourbillon Extra-Plat Automatique 5367 instead has a grand feu enamel dial that is blue in colour. While we loved the lustrous white enamel dial in previous iterations of the watch, the blue enamel dial just brings out so much more character from the piece. And while obviously not as dressy as if it were white, the blue dial is more contemporary and exciting to look at, at least in our opinion. For maximal legibility, the markers – the stylised Breguet numerals and symbols – are printed with powdered silver. They are still printed off-centre like before, and while some may lament the lack of balance, we feel that the quirky design is a masterstroke and what breathes life onto the dial. 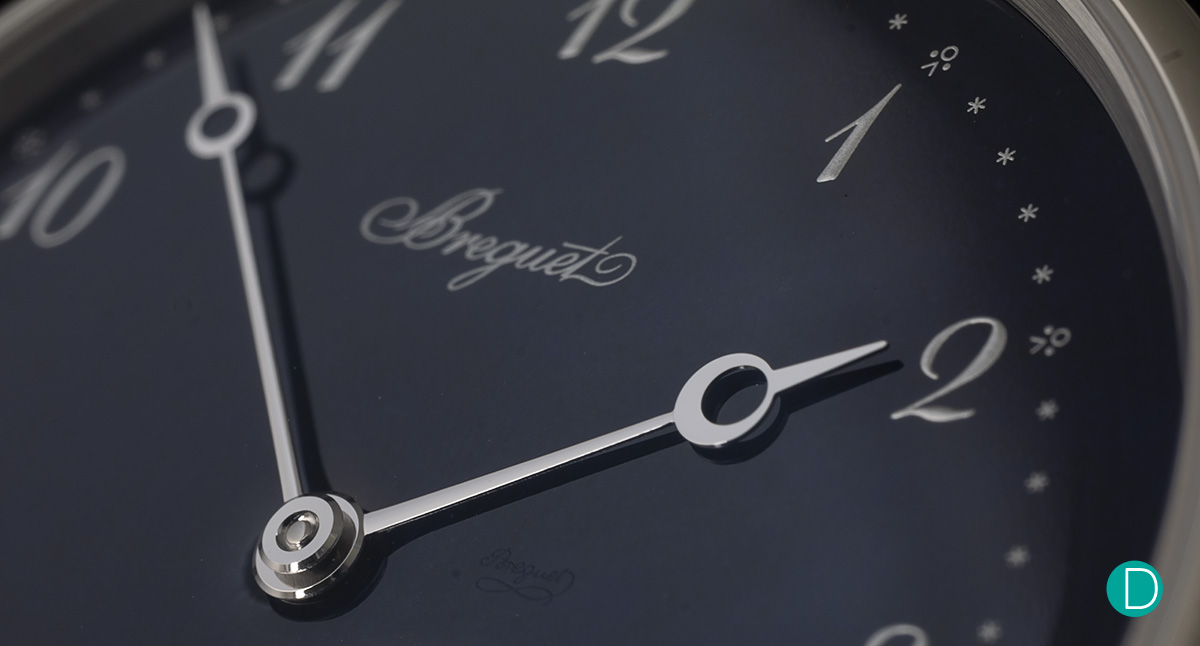 The tourbillon is situated at the 5 o’clock position and takes up a fair bit of the dial, which is what you’d want on a watch that showcases the tourbillon. If you take a closer look just above the tourbillon aperture, you’ll find the secret ‘Breguet’ signature, a countermeasure against counterfeits that Abraham-Louis came up with in 1795. And of course, indicating the time in hours and minutes are a pair of open-tipped Breguet hands that look oh-so charming and refined. Together, all these elements make up the visage of one of Breguet’s most quintessential tourbillon timepiece. 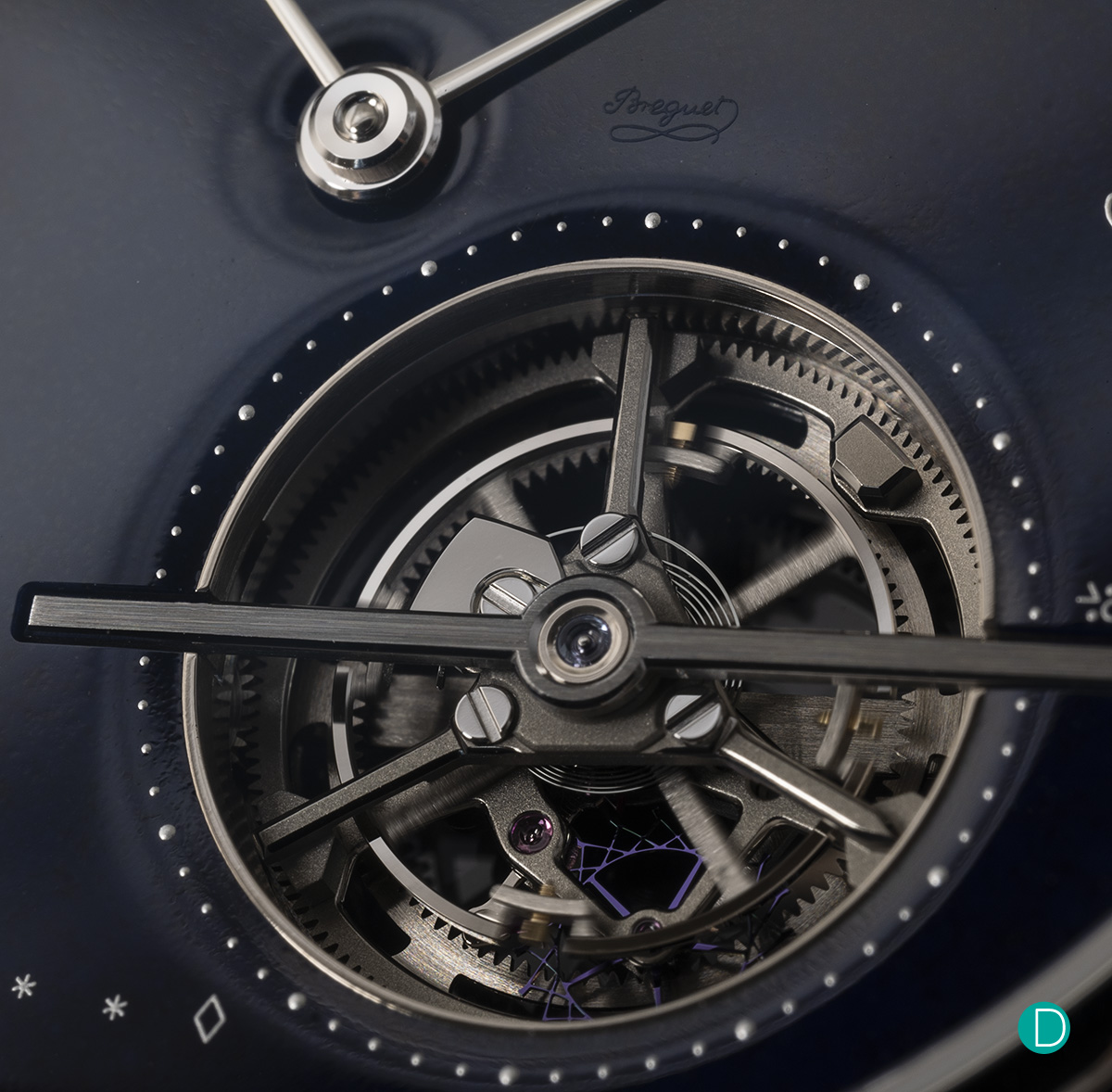 The Breguet secret signature etched onto the enamel dial.

Driving the new Classique Tourbillon Extra-Plat Automatique 5367 is the same tried-and-trusted, 334-part, 33-jewel Calibre 581. The single-barreled movement has a remarkable 80 hours of power reserve in spite of a power-hungry tourbillon and a fast beat of 4 Hz. The tourbillon regulator utilises a lightweight titanium carriage that makes a full rotation every minute. The balance spring within is made of silicon, rendering it immune to magnetism. Another interesting innovation that is utilised in the Calibre 581 is the peripheral winding rotor which allows for a thinner watch profile (at the expense of a larger diameter) and the rest of the movement to be viewed unobstructed. 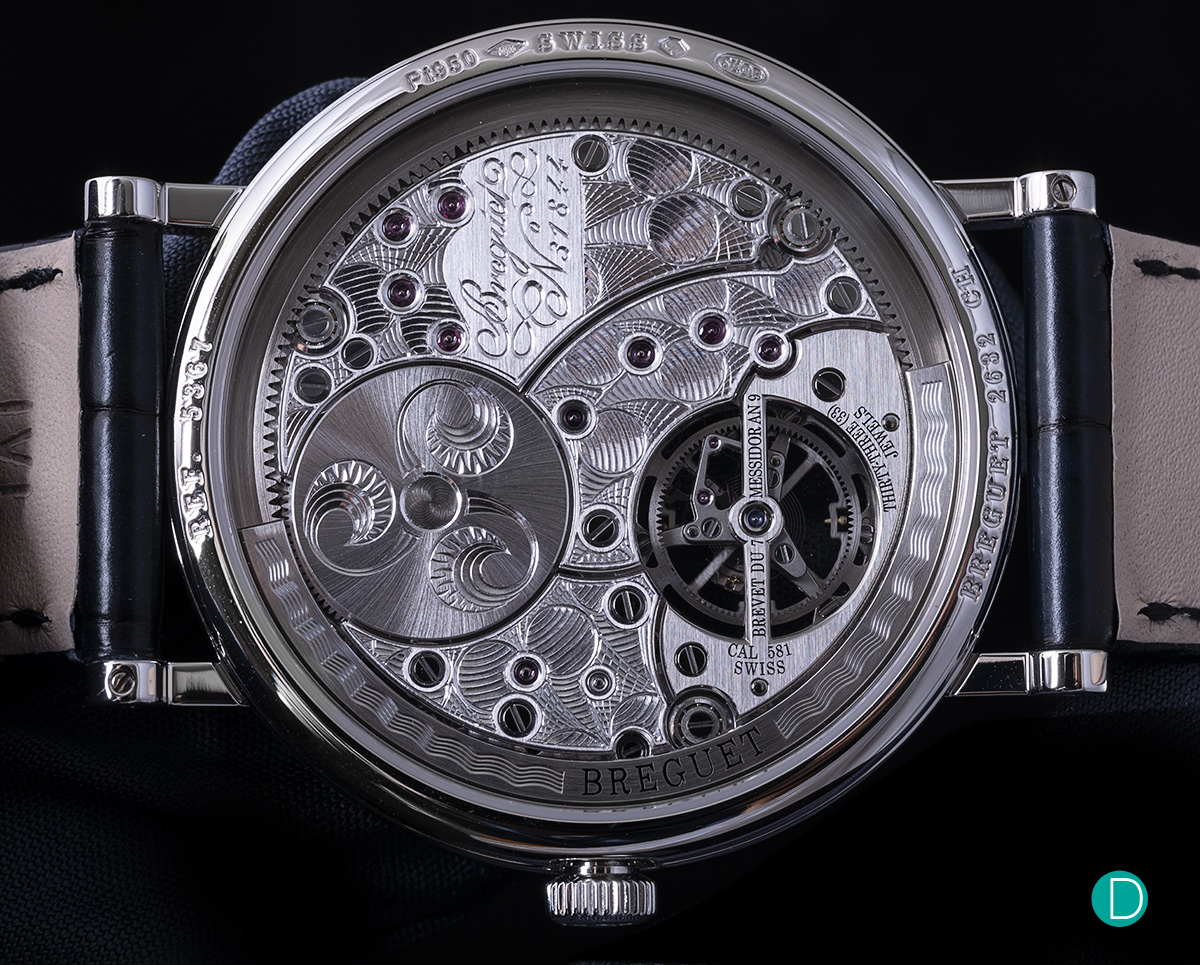 The Calibre 581 as seen through the sapphire crystal case back.

It’s not just the technical specifications and innovations of the movement that impresses, but also the finissage applied. While the front of watch is minimalist in design, the back is much more ornate in nature. The bridges and peripheral rotor are filled with hand-engraved motifs, with the edges expertly chamfered and polished. There are also numerous outward and inward angles to be found, the latter being impossible to manufacture by machine and a true test of a craftsman’s skill. Other finishing techniques that have been employed include black polishing (of screw heads), straight graining (on the tourbillon bridge), and snailing (on the barrel cap). It simply doesn’t get much better than this.

The Classique Tourbillon Extra-Plat Automatique 5367 is a timepiece that marries not just the peak of the technical and artistic aspects of mechanical watchmaking, but also the very best of traditional and contemporary watch design. The combination of its blue grand feu enamel dial, tourbillon, and richly engraved movement is irresistible to any fine watchmaking connoisseur; few watches in the market can compare to the Classique Tourbillon Extra-Plat Automatique 5367. 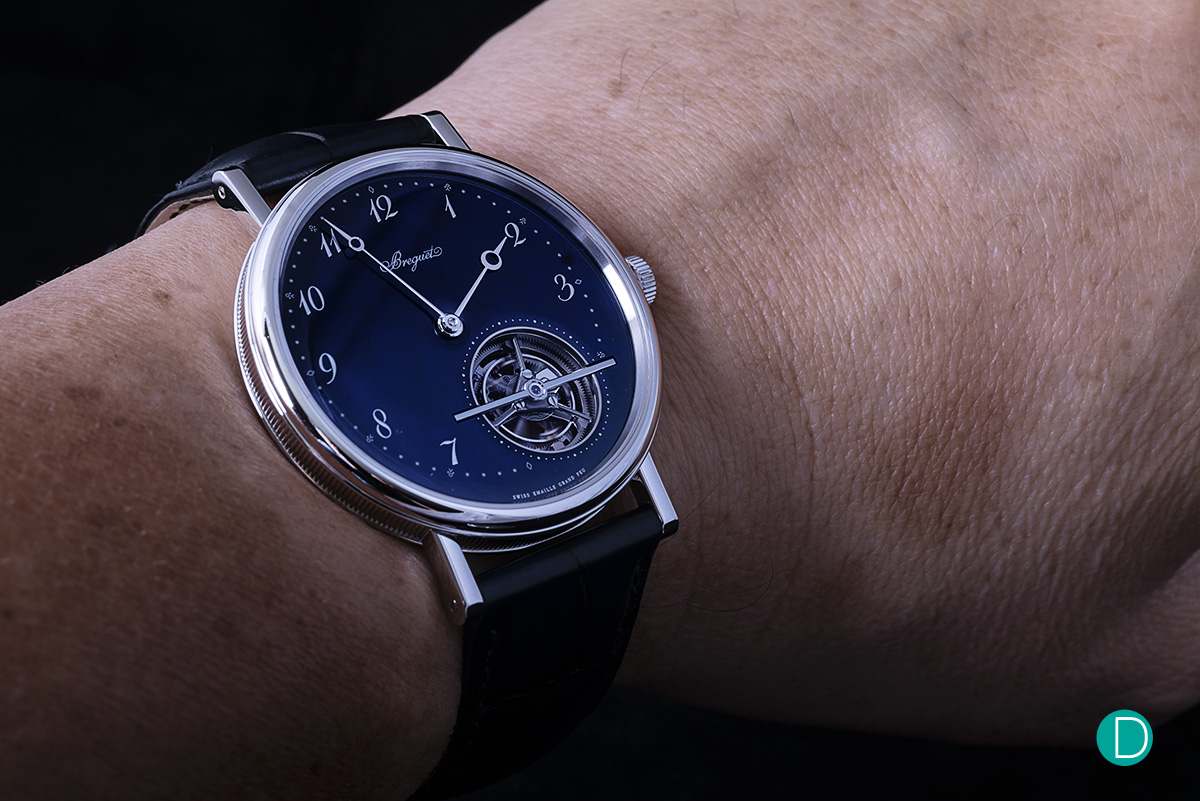 The straight lugs cause the watch to wear slightly larger. Nevertheless, it still sits elegantly on the average wrist.

Nevertheless, one that does come to mind is the A. Lange & Söhne 1815 Tourbillon with enamel dial. The price tags for both the Breguet and the Lange are comparable, the former being USD161,800 and the latter being USD197,200, about a 20% premium. Much like the Breguet, the 1815 Tourbillon has an enamel dial, an aperture displaying the tourbillon, and no complications. The Calibre L102.1 that drives the 1815 Tourbillon, however, is manually wound. It is also technically fascinating with its zero-reset mechanism and stop seconds functionality that also hacks the tourbillon, a rarity even today. Both ideas are patented, of course. It goes without saying the movement is also exceptionally well-finished, though not as ornately decorated as the Breguet’s Calibre 581. 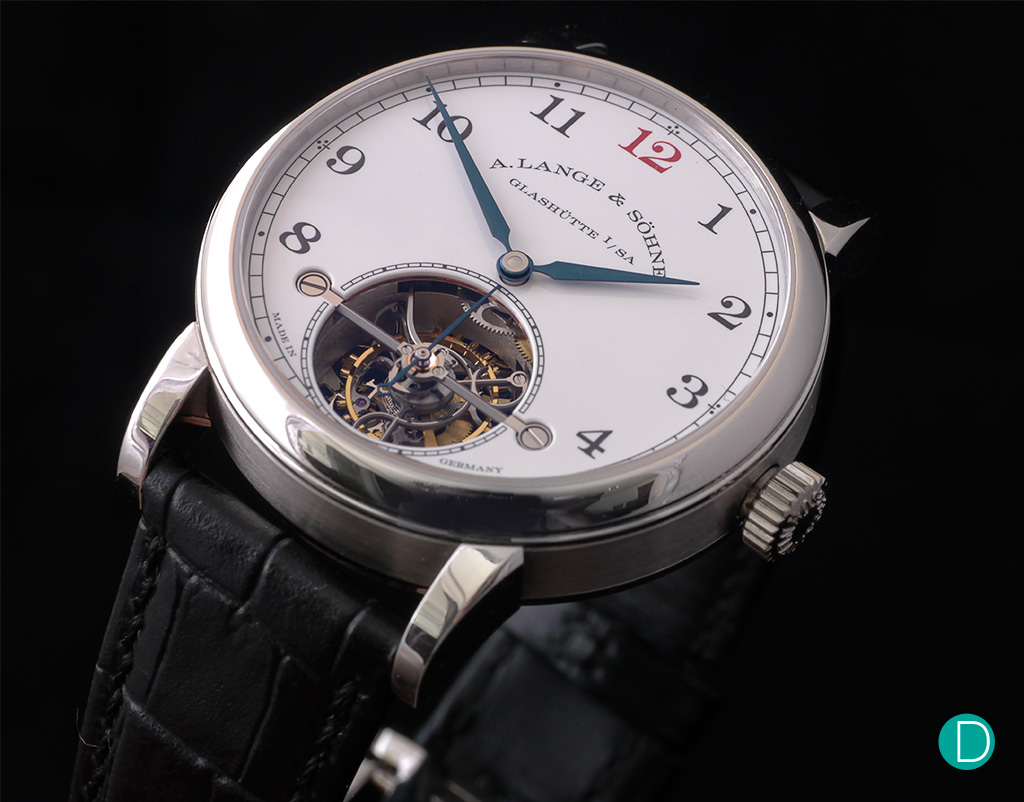 Both the Classique Tourbillon Extra-Plat Automatique 5367 and the 1815 Tourbillon represent the upper echelon of haute horlogerie and thus command exorbitant prices. But what if there is a specimen that is similar in spirit but available at a much, much more accessible price? If you’re thinking of the Ulysse Nardin Marine Tourbillon, then you’ve caught on. It is quite literally the most ‘value-for- money’ watch of its kind. The Marine Tourbillon packs a tourbillon at 6 o’clock, a guilloched dial that is also adorned with blue grand feu enamel. Sure, its finissage is not quite up to the stratospheric level of the Breguet or Lange, but at CHF28,000, you may as well turn yourself in to the cops, because it’s a steal. 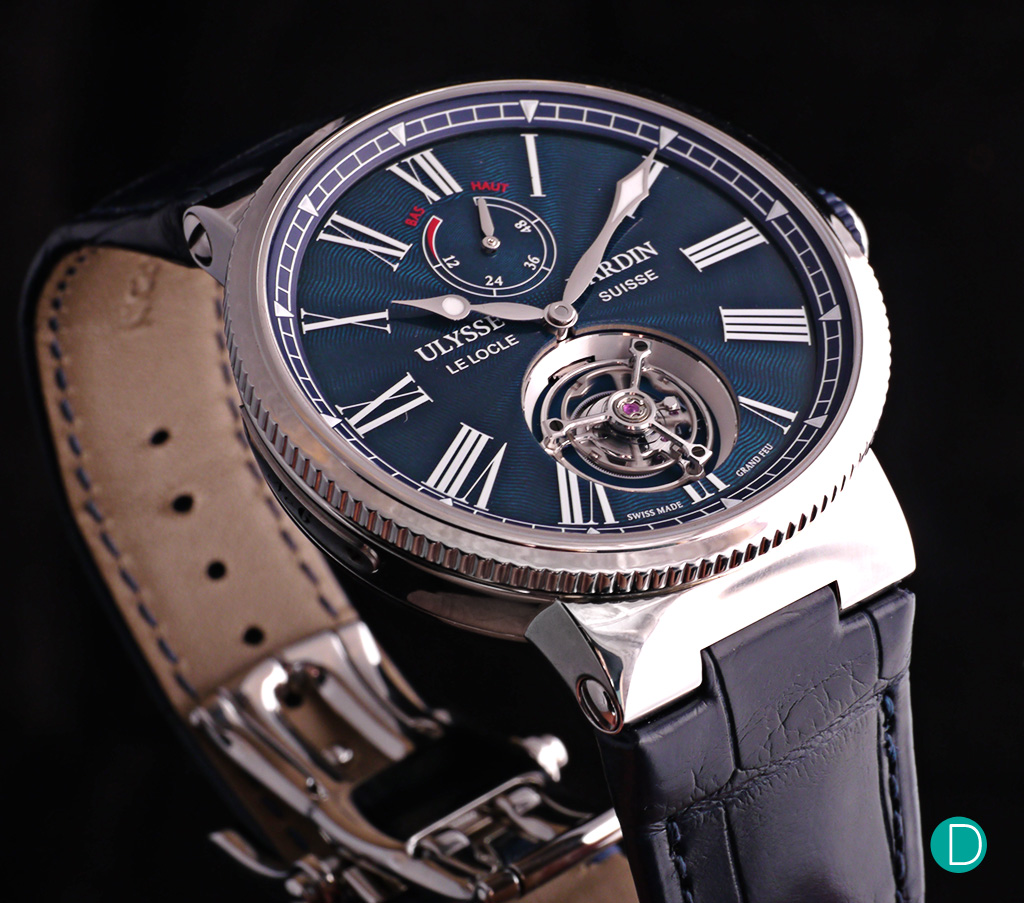 It’s not a new watch, and it’s not going to shift watchmaking paradigms, but the Classique Tourbillon Extra-Plat Automatique 5367 with blue grand feu enamel dial is the variant we need. You’d be hard pressed to fault this watch. It is tremendously handsome, it has a technically and aesthetically superlative movement, and while it is expensive, it is not more expensive than other watches of its kind and level. Indeed, it is watches like the Classique Tourbillon Extra-Plat Automatique 5367 that continue to keep the watch community in awe of Breguet and fine watchmaking in general. 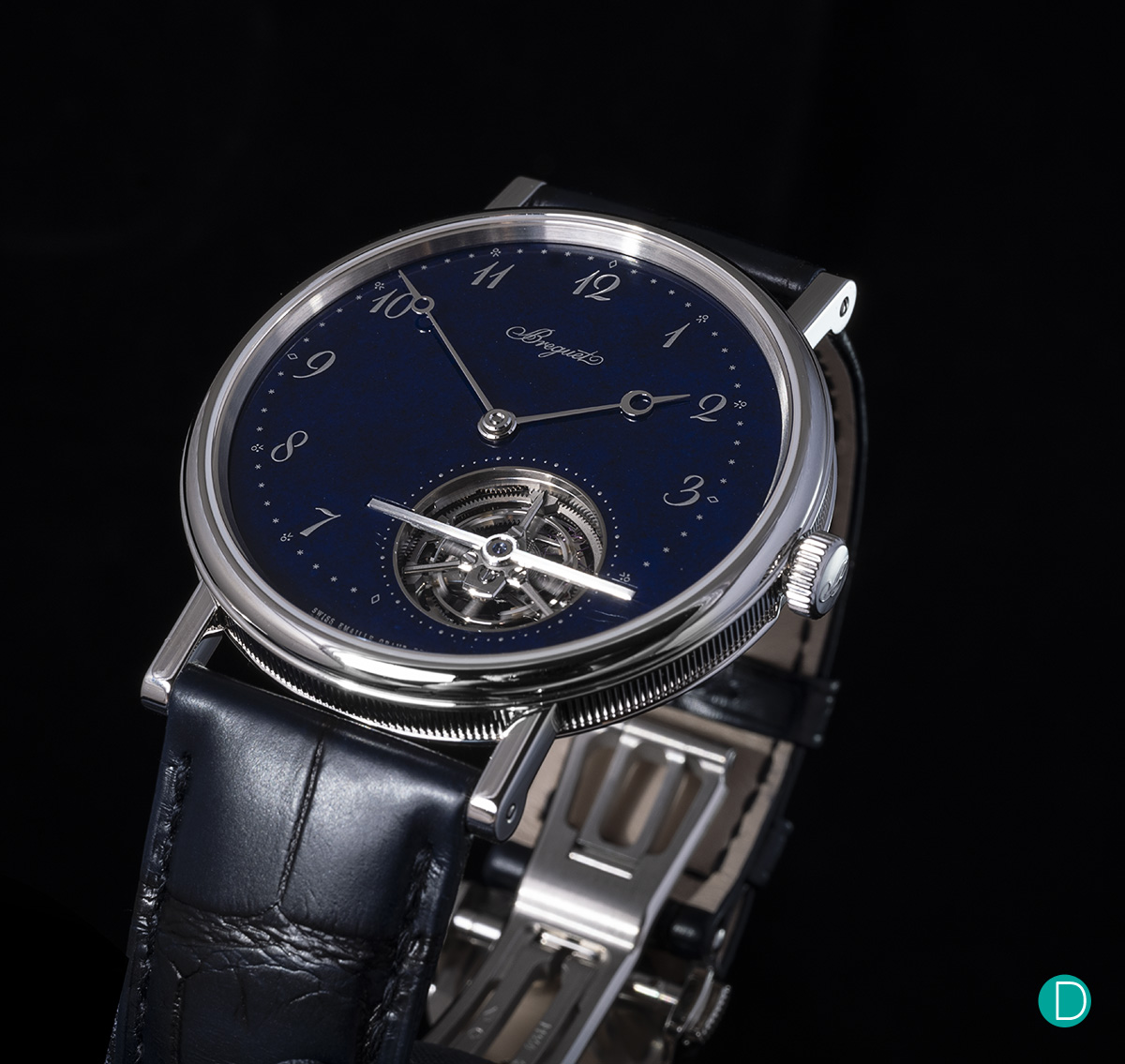