Métiers d’Art Tribute to great explorers: a new window on the world and on history, opened by talented Master artisans

Métiers d’Art Tribute to great explorers: a new window on the world and on history, opened by talented Master artisans 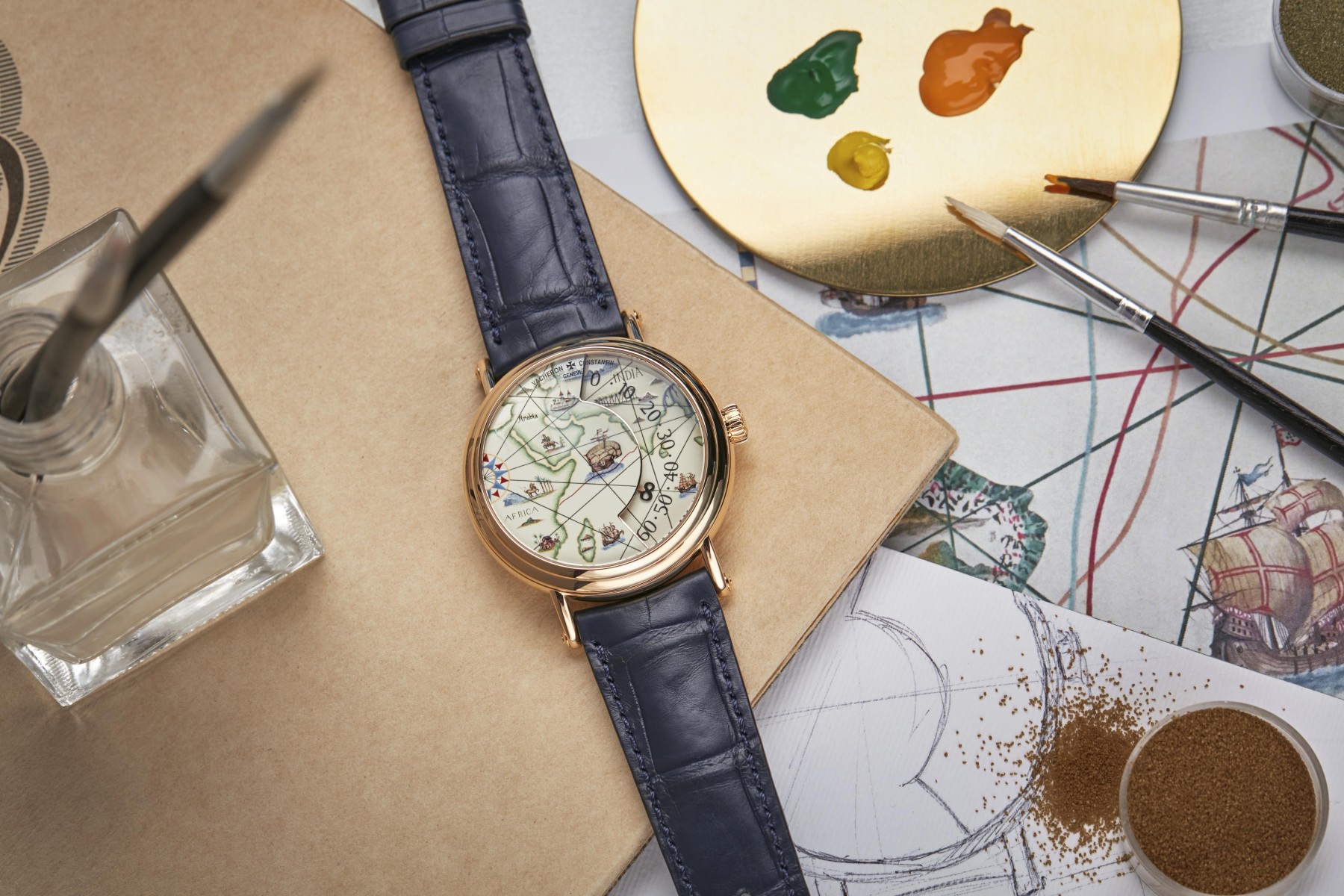 Geneva, April 7th 2021 – They evoke a time when the world had yet to be discovered. They retrace the famous epic journeys of the great 15th century explorers who braved the seas and oceans to discover distant horizons. Bartolomeu Dias, Vasco da Gama, Pedro Álvares Cabral: Vacheron Constantin celebrates their spirit of adventure through a new series of three ten-piece limited editions, the Métiers d’Art Tribute to great explorers. Crafted in Grand Feu enamel, each dial depicts selected portions of a 1519 map from the Miller Atlas. These three masterpieces of miniaturisation and expertise are driven by the Manufacture 1120 AT movement. These new models, presented at Watches & Wonders 2021, are part of the theme of the Maison for 2021 : entitled Classic with a Twist, it highlights Vacheron Constantin’s creative energy, guided by an identity that celebrates a heritage and dares to deliver the unexpected.

The spirit of travel, exploration and discovery of arts and cultures is an integral part of Vacheron Constantin’s history. A history rooted in the origins of the Manufacture, in an age when François Constantin did not hesitate to travel the world to open new markets and to fly the banner of the Maison high and wide, wherever possible. This openness to the world still pervades the philosophy of the Manufacture, which symbolically celebrates the spirit of adventure through a new journey – on this occasion a voyage through time – in memory of the great 15th century Portuguese explorers.

With this third opus in the Métiers d’Art Tribute to great explorers collection, which completes two series presented in 2004 and 2008, Vacheron Constantin ventures into one of history’s most exhilarating chapters. In the wake of models dedicated to Magellan, Zheng Hé, Christopher Columbus and Marco Polo, which proved a great success with collectors, comes the turn of Bartolomeu Dias, Vasco da Gama and Pedro Álvares Cabral to be honoured through extraordinary miniature compositions enhanced by talented master artisans. They bear witness to the noble touch and impressive creativity of the enamellers whose mastery of Grand Feu enamel once again broadens the horizons of the Métiers d’Art collection. A rare skill extending an invitation to travel while firing the imagination.

Masterful miniature Grand Feu enamel expressions of patience and meticulous care
Inspired by a map from the 1519 Miller Atlas, of which a painted reproduction is kept in the Portuguese Maritime Museum (Museu de Marinha – Lisbon), each dial shows a part of the world and the maritime routes respectively taken by the three explorers. In order to replicate the finely nuanced colours and the extreme delicacy of the motifs, the Maison opted for the art of enamelling. The result is three dials in Grand Feu enamel, masterpieces of patience and precision that require a full month’s work and 11 firings in the kiln at a temperature of between 800 and 900°C. These are all stages in which mastering fire proves crucial, since a few seconds too many can jeopardise several weeks of work.

The art of enamelling is a rare skill, a subtle blend of experience and sensitivity demonstrated in each move made by the artisan. Composed of crystal and metal oxides, enamels come in the form of small blocks of colour that the enameller first crushes into an extremely fine powder. The latter is then worked to create a substance similar to paint, which is applied in successive touches, enabling the enameller to represent motifs with incredible finesse and nuance. After coating the dial with the background colour, the enameller tackles the dial motifs, starting with the outlines of the continents, which are here enhanced with gold-coloured enamel powder. The decorative elements of this elegant composition – including the ships, fauna, flora and wind rose – are also produced using the delicate technique of miniature painting, thus serving to reproduce a host of details and subtly graded shades, obtained after numerous tests by the enameller. Each addition of colour requires another firing, since enamel is a mineral material that must be melted down in order to display its famous brilliance and intense depth.

Calibre 1120 AT with satellite hours
So as to give free rein to the enameller’s expertise, the three Métiers d’Art Tribute to great explorers models are powered by in-house Calibre 1120 AT. This movement is distinguished first and foremost by its 5.45 mm thinness enabling the 41 mm-diameter 4N pink gold case to maintain a trim 11.68 mm overall thickness guaranteeing an elegant appearance on the wrist.

The mechanism is also distinguished by its singular construction and its original time display mode enabling the wearer to travel visually through the dial as the hours pass by. Concealed beneath the upper part of the dial, the hours wheel is equipped with three arms each bearing four hours numerals, driven in turn by a cam shaped like the Manufacture’s Maltese cross inspired emblem. This ingenious satellite module enables the hours to sweep across the dial from top to bottom, traversing the fixed minutes circle positioned along a 120° arc. The hours numerals thus travel through the dial and their position gives an indication of the minutes replacing a traditional hand-type display.

Revealed through the transparent caseback, the movement decorations – notably including the 22-carat pink gold oscillating weight adorned with a wind rose – are entirely worthy of its technical nature.

Métiers d’Art Tribute to great explorers –Bartolomeu Dias
If his crews had not convinced him to give up on continuing the journey beyond the southern tip of Africa, perhaps Bartolomeu Dias (1450 – 1500) would have been the first to reach the Indies. The illustrious Portuguese explorer made history in a different way, by discovering the Cape of Good Hope in 1488, paving the way for future expeditions. Bartolomeu Dias was also a member of the crew of Vasco da Gama, who led his fleet to Indies between 1497 and 1498.

The route taken by Bartolomeu Dias’ ships in 1488 is represented by a red line on the Grand Feu enamel dial, enhanced by numerous incredibly refined details. With the help of a magnifying glass, a close look will reveal the silhouette of the men composing the explorer’s crew on board the two ships sailing west of Africa; or the palette of shades used by the enameller to precisely reproduce the landscapes, fauna and flora as they are represented on the map of the Miller Atlas.

Métiers d’Art Tribute to great explorers – Vasco da Gama
The long journey that took him from Portugal to the coasts of India was one of the most important 15th century discoveries. The Portuguese explorer Vasco da Gama (1469 –1524), who left his native country in 1497, was the first to travel from Europe and Asia by sea, following an epic and often hellish journey across the Atlantic and Indian Oceans. After circumnavigating the southern tip of Africa, his fleet of four ships sailed along the coast as far as Kenya before embarking on a crossing towards the Indies, which he reached in 1498.

The sea route taken by its crew is finely traced in red enamel on the dial, each detail of which is a very faithful reproduction of the map appearing in the Miller Atlas. The gaze will naturally be drawn to a ship from Vasco da Gama’s fleet in the dial centre, sails billowing on a stormy sea; or to the circumference of the wind rose and the continents enhanced with gold-coloured enamel powder.

Métiers d’Art Tribute to great explorers – Pedro Álvares Cabral
It is to this Portuguese aristocrat and explorer that we owe the discovery of Brazil in 1500. Pedro Álvares Cabral (1467 – 1520) was commissioned by King Manuel I of Portugal to travel to the Indies to continue the work of Vasco da Gama, but he took a very different route from his contemporary. Rather than sailing along the African coast to the southern tip of Africa, the fleet led by Pedro Álvares Cabral headed west, until they discovered a new world, Brazil.

This route is depicted by a red enamel line standing out against a beige enamel background punctuated by extremely faithful representations of the elements present on the map of the Miller Atlas. In the centre of the dial, a ship from Pedro Álvares Cabral’s fleet, sails buffeted by the wind, proudly cleaves the sea in an extraordinarily lifelike manner. The accuracy of the craftsmanship is also expressed in the shimmering feathers of the birds as well as in the depiction of human figures on the South American continent.

Classic with a Twist

Vacheron Constantin’s creativity has always remained closely attuned to its time while evoking its memories. This byword for elegance, adopted by each watchmaker, artisan and designer throughout the years and centuries, celebrates heritage and dares to explore the unexpected. Poised at the intersection between technical virtuosity and aesthetic refinement, the enduring allure of Vacheron Constantin timepieces makes its way unscathed through passing eras. Because timelessness cannot be achieved merely by complying with the canons of traditional watchmaking, each creation is tinged with a touch of boldness revealed in the smallest details. Special displays, offset indications, specific chamfering of all components, hand-crafted finishing and the complexity of a mechanism are just a few examples of this expertise. The result is a very personal field of expression where technique and style converge in a subtle harmony between the conventional and the atypical.

Vacheron Constantin explores an exhilarating page of history with the Métiers d’Art Tribute to great explorers’ collection, available in a series of three ten-piece limited editions. In the wake of Magellan, Zheng Hé, Christopher Columbus and Marco Polo, to whom the Manufacture had already paid tribute in 2004 and 2008, comes the turn of Bartolomeu Dias, Vasco da Gama and Pedro Álvares Cabral to be honoured through extraordinary compositions enhanced by talented master artisans. To celebrate the discoveries made by these three 15th century Portuguese navigators, the Maison has opted for Grand Feu enamel and the technique of miniature painting. Masterpieces of patience and meticulous care, each of the three dials represents part of a map from the 1519 Miller Atlas, of which a reproduction is kept in Portuguese Maritime Museum (Museu de Marinha – Lisbon). These extraordinarily precise compositions are framed by a slim 18K 4N pink gold case measuring 41 mm in diameter. In order to provide abundant expressive scope for the enameller, these models beat to the rhythm of the 1120 AT self-winding movement, driving an off-centre time display thanks to a satellite hours module.