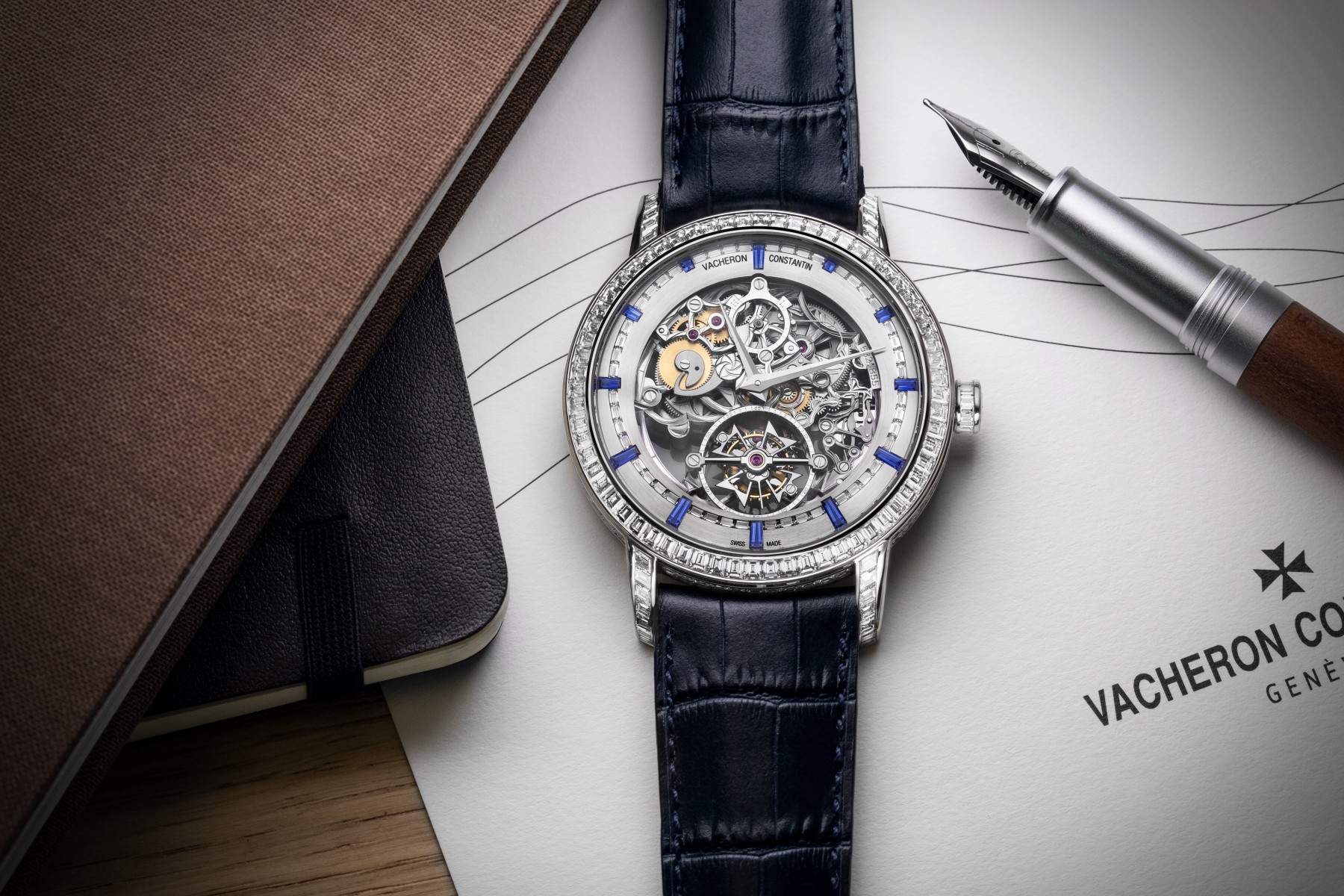 Vacheron Constantin offers a sparkling interpretation of its 2260 SQ calibre. The movement components are pared down to the bare minimum and meticulously engraved. Their ingenious positioning leaves ample space to admire the tourbillon and the 14-day power-reserve indicator at 12 o’clock. This technical feat is framed by diamonds set on the white gold case and on the chapter ring punctuated by 12 sapphire hour-markers.

With this one-of-a-kind Les Cabinotiers – Tourbillon Openworked High Jewellery model, Vacheron Constantin has created an exceptional watch whose appeal stems from a blend of technical prowess and artistic crafts which are given pride of place. A true mechanical composition, the watch impresses first and foremost through the intricate arabesques of its manual-winding 2260 calibre, pared down by means of a skilful skeletonisation process. The aim here is to remove as much material as possible from the movement components, and in particular from the bridges, in order to ensure optimal lightness, yet without ever threatening its reliability and functionality. Each of the 231 components is then hand-finished and in some cases engraved, in order to give more depth to the calibre.

Mainly located in the upper part of the case, the going train of the calibre leaves an almost entirely unobstructed view of the tourbillon, majestically positioned at 6 o’clock. With its carriage shaped like the Vacheron Constantin Maltese cross emblem, this mobile part of the movement appears to be floating on air and exudes a powerful fascination. Ingenious in more ways than one, this construction serves to conceal the four barrels – mounted in coupled pairs and together measuring a total of 22 metres long – which provide the movement with a formidable two-week power reserve. The latter is indicated on a 280° sector, appearing at 12 o’clock along the same axis as the tourbillon and thereby contributing to the aesthetic equilibrium of the model.

These mechanical feats are matched by the exquisite gemsetting adorning this High Jewellery model. 46 mm diameter 18K white gold case is admirably set with 238 baguette-cut diamonds on the bezel, lugs and crown. The chapter ring positioned around the dial periphery also consists of a row of 48 baguette-cut diamonds, punctuated by 12 blue sapphire hour-markers. The shade of the sapphires echoes the alligator leather strap, of which the pin buckle and folding clasp are each set with 12 baguette-cut diamonds. Embodying a subtle balance between aesthetics and technicality, this Les Cabinotiers – Openworked Tourbillon High Jewellery watch flaunts a resolutely flamboyant style.

With this one-of-a-kind Les Cabinotiers – Openworked Tourbillon High Jewellery model, Vacheron Constantin has created an exceptional watch whose seductive power stems both from technical prowess and the artistic crafts deployed. A true mechanical composition, the watch impresses first and foremost through the intricate arabesques of its 2260 calibre pared down to essentials by skilful skeletonization – a technique that highlights the tourbillon and its Maltese cross-shaped carriage that appears to be floating on air. This manual-winding movement has a 14-day power reserve with an indicator at 12 o’clock, a technical feat achieved thanks to the presence of four barrels mounted in coupled pairs. The expertise demonstrated by the engraver in decorating the components, as well as by the gemsetter in adorning the dial and case with 330 baguette-cut diamonds and 12 sapphires, transform this watch embodying the grand tradition of mechanical watchmaking into a veritable work of art.