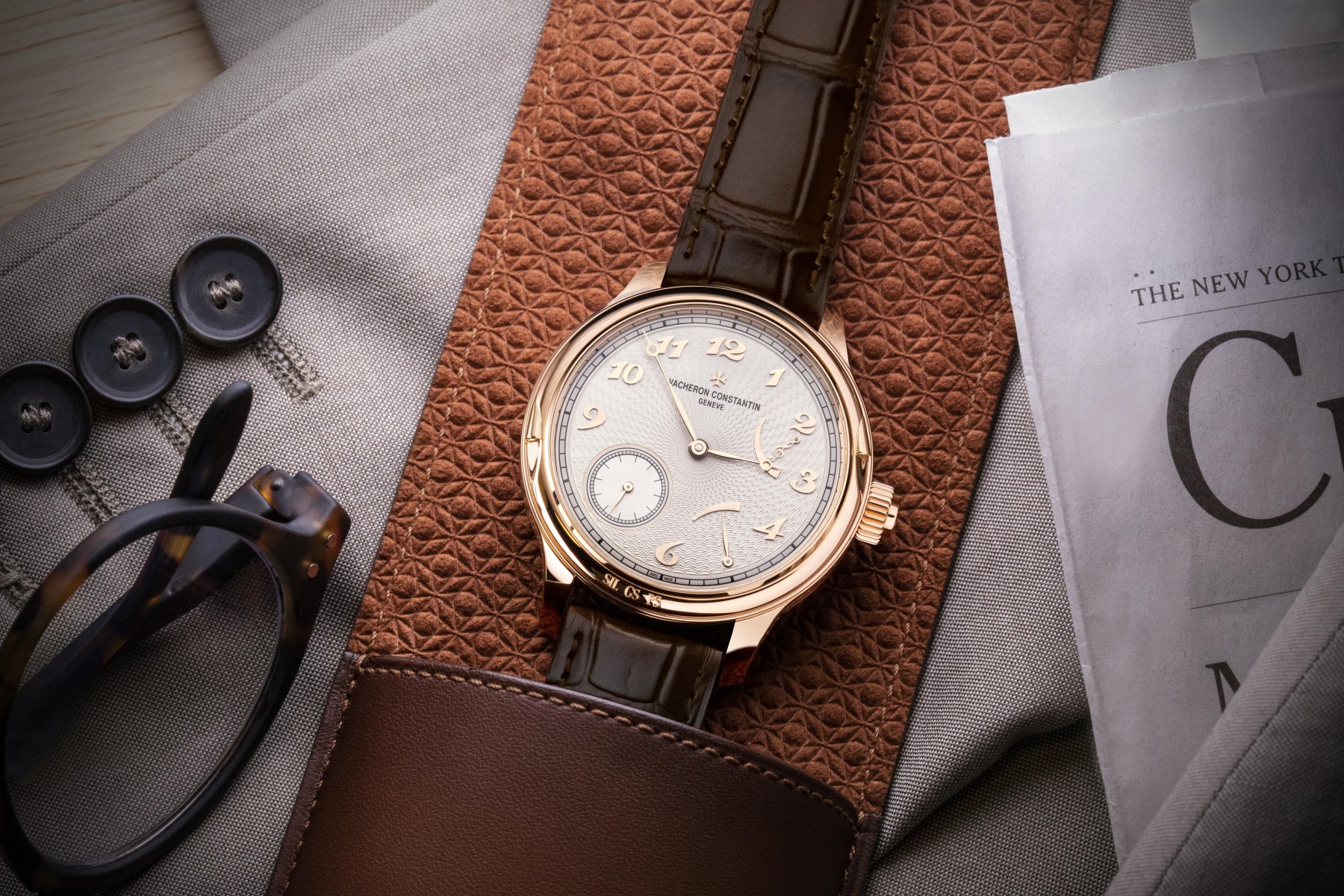 This one-of-a-kind model paying tribute to the grand tradition of “musical” watches by Vacheron Constantin, houses a grande and petite sonnerie movement with a minute repeater mechanism. The case honours the art of hand engraving with a motif depicting the score of Beethoven’s sixth symphony.

Grande sonnerie watches are in a class of their own among musical timepieces due to their complexity. It was not until 1992 that the first wristwatch model of this kind appeared. Since then, the mastery of these pieces that sound the hours and quarters in passing – with repetition of the time before each quarter in grande sonnerie mode and without repetition in petite sonnerie mode – has remained fairly uncommon due its extremely stringent construction requirements. Producing one calls for an integrated movement design that must also take into account several specificities of these complex mechanisms – starting with issues related to the security of its operation, given that any interference between the various functions is likely to damage the calibre. Energy management is also an essential parameter, since a grande sonnerie is called into action 96 times every 24 hours making a total of 912 hammer strikes on the watch’s gongs. As far as sound production is concerned, it requires great technical and musical virtuosity to ensure that the sequences are clearly audible and melodiously clear.

Vacheron Constantin has mastered all these techniques for more than two centuries. The Manufacture’s archives indeed reveal a first pocket watch with grande and petite sonnerie and minute repeater dating from 1817. The company registers also make numerous references to striking watches, often associated with other complications or astronomical functions. With the advent of the wristwatch, Vacheron Constantin’s expertise in musical watches continued to be expressed, particularly through ultra-thin models, right the way through to 2017: key date for the Maison corresponding to the introduction of its Les Cabinotiers Symphonia watch, the first grande sonnerie wristwatch in Vacheron Constantin’s history equipped with the 1860 calibre also featuring a minute repeater. It is this same movement, stemming from ten years of research and development, that drives Les Cabinotiers Symphonia grande sonnerie – The sixth symphony.

This one-of-a-kind model is notably characterised by a dial adorned with a circular cross weave guilloché motif housed in an 18K 5N pink gold case, of which the middle bears a meticulously executed base-relief engraving of a musical score. The latter echoes Ludwig van Beethoven’s “Pastoral” Sixth Symphony in F major, hand-engraved on an olive-leaf background, decor inspired by a pocket-watch from the Vacheron Constantin Heritage collection, named « Les Bergers d’Arcadie », created in 1923. The pure sound along with the understated dial punctuated by a small seconds display and two power-reserve indicators (one for the strikework with a treble clef hand-shape and the other for the timekeeping functions) endow this watch with the Maison’s characteristic aura of elegance. The beige tone of the dial also reinforces the classicism of the watch, enhanced by the open-tipped hands and the typography of the hour numerals.

Excellence in every detail

Les Cabinotiers Symphonia grande sonnerie – The sixth symphony meets a double requirement consisting in making a supreme complication movement – comprising 727 parts that takes 500 hours of assembly to fit within a 37 mm diameter – that is as easy to use as it is perfectly secure. The bi-directional manual-winding calibre with two barrels, one delivering 72 hours of power reserve and the other 20 hours of strikework power reserve, is thus equipped with innovative security systems that protect its striking mechanisms. The latter are controlled by the bezel for the grande and petite sonnerie and by a push-piece housed in the crown for the minute repeater. To ensure a perfectly regular sequence of strikes on the monobloc goings, Vacheron Constantin’s master watchmakers have succeeded in eliminating the “phantom quarters”, meaning the short silences generally perceptible between the hours and minutes struck by a repeater. For the sake of excellence, the calibre is also equipped with a non-dragging surprise jumper, a mechanism enabling accurate strikes on full hours and quarters. A masterpiece of elegance and complexity, this Les Cabinotiers Symphonia Grande sonnerie – The sixth symphony reveals the subtleties of its striking movement through the transparent sapphire crystal caseback.

Chiming watches occupy a special place among horological complications. For more than two centuries, these complex mechanisms have been highlighted by Vacheron Constantin. Today, Les Cabinotiers department has chosen to pay tribute to them through one-of-a-kind creations on the theme “La Musique du temps®”.

Born from the need to tell the time in the dark in an age when people had to rely on candlelight, “audible” watches have taken various forms: repeaters (indicating the hours and sometimes the quarters and minutes on request), sonnerie (striking) watches (indicating the hours and quarters in passing) and alarms (which can be programmed to ring at specific times). While each of these complications has its own distinctive characteristics, they all combine an integrated and complex mechanism with the finely crafted nature of musical instruments in terms of their resonance, acoustics and harmonics. Featuring watch cases equipped with complex movements as their only means of musical expression, these creations represent a magnificent feat of miniaturisation.

At Vacheron Constantin, the first mention of a chiming watch dates back to 1806: a gold pocket watch with minute repeater registered by the founder’s grandson Jacques-Barthélemy, in the very first production register kept in the company’s archives. Ever since, sonnerie or repeater watches have been an integral part of the Manufacture’s proud heritage, steadily enriched over the decades.

Sound and music have always played a role in the Maison’s partnerships, the latest of which is with Abbey Road Studios, a name closely associated with iconic artists such as The Beatles, Adele and Oasis. In collaboration with the studios, Vacheron Constantin launched its Fiftysix® collection, backed by the “One of not Many” campaign. The partnership also has a role to play for “La Musique du Temps®”, as Vacheron Constantin entrusts Abbey Road Studios with recording the unique sound of each model.

“Above and beyond extremely similar values, Abbey Road Studios and Vacheron Constantin work closely together on creative collaborations involving both content creation and sharing expertise. Entrusting the production of the sound prints of our pieces to an internationally recognised expert in the recording world is an integral part of our collaborative endeavours,” explains Laurent Perves, CMO Vacheron Constantin. For the first time, the repeater watches from the “La Musique du Temps®” range have a unique sound imprint, recorded and certified by Abbey Road Studios. “The opportunity to capture the sonic identity of these incredible timepieces is a privilege,” explains Jeremy Huffelmann, Head of Partnerships at Abbey Road Studios. “These recordings perfectly encapsulate the shared values of craftsmanship, expertise and excellence that define our collaboration, whilst forever preserving the personality of these singular timepieces.”

It was not until 1992 that the first grande sonnerie wristwatch appeared. Since then, the mastery of these pieces that sound the hours and quarters in passing – with repetition of the time before each quarter in grande sonnerie mode and without repetition in petite sonnerie mode – has remained fairly uncommon due to its extremely stringent construction requirements. While the Vacheron Constantin archives reveal such pocket watches as of the early 19thcentury, the first grande sonnerie wristwatch created by the Maison was unveiled in 2017, equipped with the 1860 calibre also featuring a minute repeater. It is this same 727-part movement that drives the Les Cabinotiers Symphonia grande sonnerie – The sixth symphony watch, whose 18K 5N pink gold case bears a meticulously executed bas-relief engraving of a musical score. The latter pays tribute to Ludwig van Beethoven’s “Pastoral” Sixth Symphony in F major, hand-engraved on an olive-leaf background, decor inspired by a pocket-watch from the Vacheron Constantin Heritage collection, named « Les Bergers d’Arcadie », created in 1923.