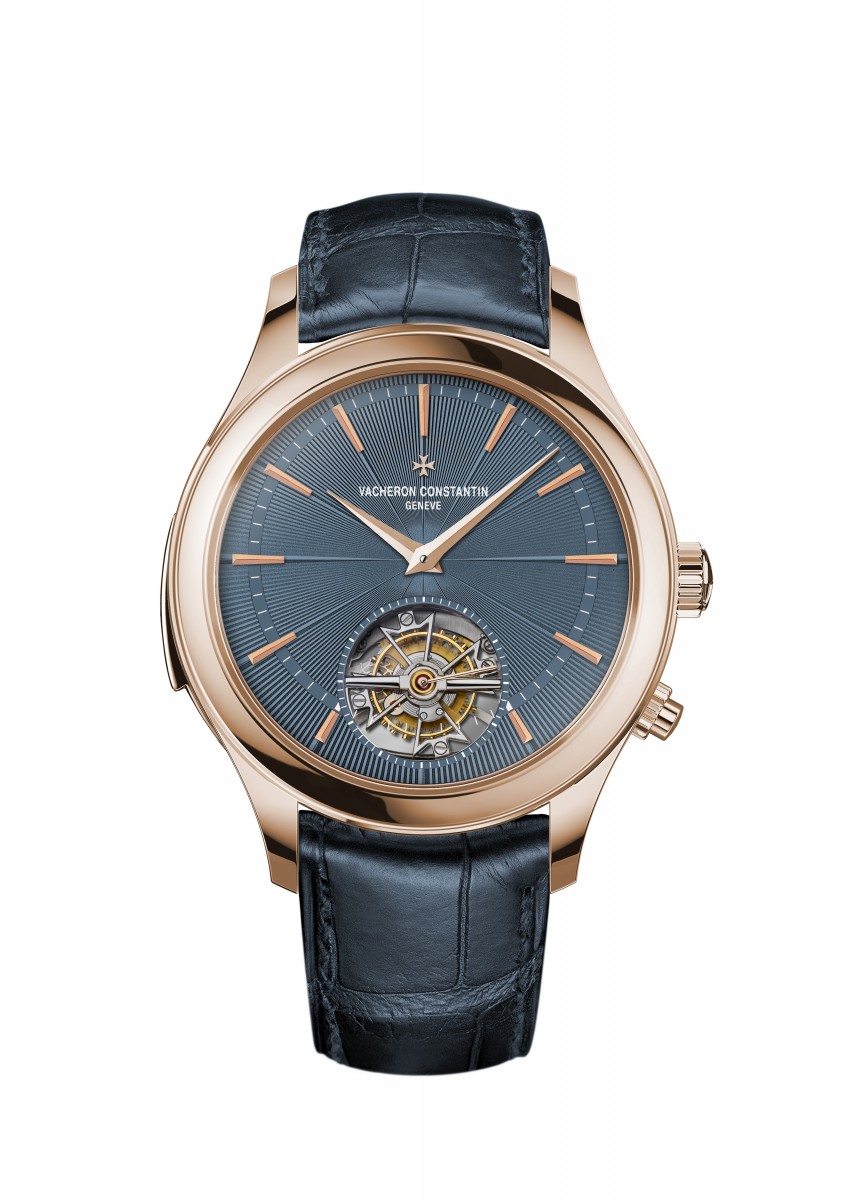 While the primary function of watches serving as temporal points of reference has already challenged watchmakers, that of helping to determine spatial bearings is another daunting venture. Especially when these two functions are combined within the same chiming watch. By integrating in a single watch a tourbillon regulator aimed at enhancing tradition; a minute repeater embodying the noble lineage of the Maison’s chiming watches; and a rotating map of the celestial vault to highlight the cosmology of the universe, Vacheron Constantin offers a watch of rare complexity: the unique piece Les Cabinotiers Minute repeater tourbillon sky chart – A celestial note. Its elegance is accentuated by the slenderness of the calibre housed in an 18K 5N pink gold case measuring 45 mm in diameter and only 15.1 mm thick.

The elegant and complex watchmaking characterising the approach adopted by the Les Cabinotiers department has already given rise to models such as Les Cabinotiers Celestia Astronomical Grand Complication 3600 – a combined display of civil, solar and sidereal time with perpetual calendar – and Les Cabinotiers Symphonia Grande Sonnerie 1860 – the Manufacture’s first grande sonnerie wristwatch

Following on from these two one-of-a-kind creations unveiled in 2017, the 413-part Calibre 2755 TMRCC drives Les Cabinotiers Minute repeater tourbillon sky chart – A celestial note. Derived from the 2755 calibre, a Vacheron Constantin signature movement reserved for particularly complex models, this manual-winding version with a 58-hour power reserve is equipped with a one-minute tourbillon bearing the small seconds hand, standing out against the blue dial with its guilloché sunray finish.

Displayed on the back of the watch on a concave dial designed to accentuate the depth effect, the sky chart offers a striking view of the Milky Way and the constellations that appear in all their brilliance, as if through a telescope. Governed by a concern for accuracy, this celestial table performs a complete rotation in 23 hours and 56 minutes corresponding to the sidereal time which is displayed on the periphery, accompanied by the indication of the day, month and cardinal points. In keeping with horological requirements, an ellipse drawn on the sapphire crystal highlights the exact position of the constellations at the moment the watch is viewed.
A minute repeater completes this device serving to chime the time on demand.

To create this particularly complex chiming mechanism, controlled by a sliding bolt on the case middle, Vacheron Constantin’s engineers and master watchmakers were inspired by the work carried out on the 2005 La Tour de l’île® anniversary watch, and in particular its strike governor. This system enables the duration of the musical sequences to be perfectly timed so as to achieve a distinct and harmonious sound of the notes playing the hours, quarters and minutes by hammers striking two circular gongs. This model is thus equipped with a perfectly silent centripetal flywheel strike governor that avoids any undue wear on the mechanism.

Chiming watches occupy a special place among horological complications. For more than two centuries, these complex mechanisms have been highlighted by Vacheron Constantin. Today, Les Cabinotiers department has chosen to pay tribute to them through one-of-a-kind creations on the theme “La Musique du temps®”.

Born from the need to tell the time in the dark in an age when people had to rely on candlelight, “audible” watches have taken various forms: repeaters (indicating the hours and sometimes the quarters and minutes on request), sonnerie (striking) watches (indicating the hours and quarters in passing) and alarms (which can be programmed to ring at specific times). While each of these complications has its own distinctive characteristics, they all combine an integrated and complex mechanism with the finely crafted nature of musical instruments in terms of their resonance, acoustics and harmonics. Featuring watch cases equipped with complex movements as their only means of musical expression, these creations represent a magnificent feat of miniaturisation.

At Vacheron Constantin, the first mention of a chiming watch dates back to 1806: a gold pocket watch with minute repeater registered by the founder’s grandson Jacques-Barthélemy, in the very first production register kept in the company’s archives. Ever since, sonnerie or repeater watches have been an integral part of the Manufacture’s proud heritage, steadily enriched over the decades.

Sound and music have always played a role in the Maison’s partnerships, the latest of which is with Abbey Road Studios, a name closely associated with iconic artists such as The Beatles, Adele and Oasis. In collaboration with the studios, Vacheron Constantin launched its Fiftysix® collection, backed by the “One of not Many” campaign. The partnership also has a role to play for “La Musique du Temps®”, as Vacheron Constantin entrusts Abbey Road Studios with recording the unique sound of each model.

“Above and beyond extremely similar values, Abbey Road Studios and Vacheron Constantin work closely together on creative collaborations involving both content creation and sharing expertise. Entrusting the production of the sound prints of our pieces to an internationally recognised expert in the recording world is an integral part of our collaborative endeavours,” explains Laurent Perves, CMO Vacheron Constantin. For the first time, the repeater watches from the “La Musique du Temps®” range have a unique sound imprint, recorded and certified by Abbey Road Studios. “The opportunity to capture the sonic identity of these incredible timepieces is a privilege,” explains Jeremy Huffelmann, Head of Partnerships at Abbey Road Studios. “These recordings perfectly encapsulate the shared values of craftsmanship, expertise and excellence that define our collaboration, whilst forever preserving the personality of these singular timepieces.”

Embodying an extremely original combination within the world of horological complications, the Les Cabinotiers Minute repeater tourbillon sky chart – A celestial note watch combines several forms of watchmaking expertise. Incorporating a tourbillon regulator, a minute repeater reflecting the noble tradition of Vacheron Constantin chiming watches and a rotating map of the celestial vault, this one-of-a-kind double-sided model features a rare degree of complexity. At the heart of its 18K 5N gold case measuring 45 mm in diameter and just 15.1 mm thick beats Calibre 2755 TMRCC. This 413-part manual-winding movement operates at the rate of 18,000 vibrations/hour, a frequency typical of traditional watchmaking, while enjoying a 58-hour power reserve. The timekeeping indications are displayed on the front, including small seconds on the tourbillon carriage adorned with a Maltese Cross, while the back of the watch provides a striking view of the Milky Way and the constellations performing a complete rotation in 23 hour and 56 minutes, corresponding to sidereal time. The sliding bolt housed in the case middle suggests the presence of a minute repeater.

Indications
Hours, minutes
Small second at 6 o’clock on tourbillon carriage
Minute repeater
Tourbillon
Sidereal time, months and sky chart on the back of the watch